These would be some great changes to Perks in Warzone!

Grabbing your loadout drop is one of the most important parts of any Warzone game. Not only does it let you collect your favorite weapons, it also gives players powerful perks.

However, some perks are way more powerful than others. This is why many Warzone players want to total rework to the perks system.

Very few perks in Warzone are viable at the moment. For Perk 1, everyone picks E.O.D or Double Time, and Perk 2 is always Overkill or Ghost. Meanwhile, Amped is the only good option for Perk 3.

This has prompted one Warzone player to suggest some drastic changes to the perk system on the Warzone subreddit.

“The current perk meta has been going on for far too long and I think Raven should drastically rework the perks for Warzone, especially since it’s sort of distanced itself from MW.

Ghost/Overkill, Amped, EOD, has been the meta since launch mainly because there are no worthwhile alternatives to these perks.”

The suggestions include a much-needed nerf to the Ghost perk, as the Warzone camping meta needs a drastic change, alongside a number of buffs to currently useless perks.

For instance, the suggested buff to Quick Fix would make players plate up quicker or High Alert would also be a counter to Dead Silence. Additionally, other useless perks like Scavenger or Shrapnel would be reworked or replaced by a Cold War perk that suits Warzone better.

Meanwhile, Raven Software is making a fix for a major Warzone DLSS accuracy problem. Hopefully, this will arrive soon.

Also, check out how to find the best loadout for every weapon in Warzone.

Finally, Activision is trying to keep toxicity away from its games. Over 350,000 toxic Call of Duty players have been banned in the last year. 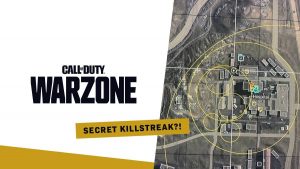 Secret Warzone Killstreak Will Help You Win the Game
5