You can find a total of 62 hidden caches in the Al-Mazrah Warzone 2 map. These are located in 9 different areas:

Here is a map overview of where to find every hidden cache in Warzone 2, (we have a detailed section for each part of the map further down):

These hidden caches contain plenty of cash that players can use to purchase the new Loadout Drop from Buy Stations.

Some hidden caches will appear underwater, and others might already have been looted by other players. If you’re struggling to gather loot, check out the best tips to get better in Warzone 2 and survive Al Mazrah.

Oasis and Taraq Village have 9 different Hidden Cache locations between two. This is one of the best landing spots in Warzone 2 due to how many caches are in close proximity.

Malk Airport has 6 different hidden cache locations that players can quickly loot to obtain multiple killstreaks, lots of cash, and even weapons with attachments.

Here are all the hidden caches players can find in the Al-Safwa Quarry and Sattiq Cave Complex.

There is only one hidden cache location in the Sariff Bay POI located at the top of a mini island that is visible from the map.

Here are all the hidden cache locations near Rohan Oil and Hydroelectric. These locations are next to some of the best Stronghold Spawn locations, so it’s a good landing spot for experienced players.

Sawah Village is one of the best landing spots in Warzone 2 due to how quickly you can gather cash to purchase your primary weapons.

If you know where to find the hidden cache scattered around here, then it can quickly turn into your favorite landing spot.

If you’re not trying to land into one of the hot drops of Warzone 2, heading to Al Sharim Pass can help you gather some quick loot without risking too many encounters.

What is a Hidden Cache in Warzone 2?

A hidden cache is a small vault that contains cash, equipment, and even killstreaks. It’s a great way to get ahead of your enemies and can be useful for players returning from the gulag.

It’s good to know where these hidden caches are located since they always contain money. This can help players buy one of their primary weapons or buy back a teammate from the Buy Station 2.

Although, if you’re earlier in the game, it might be better to try and raid one of the many Stronghold spawn locations in hopes of finding extra loot or even an active Stronghold.

It can also be helpful if you’re looking to obtain the ultimate victory and use the mini gun that you can obtain from a Black Site. 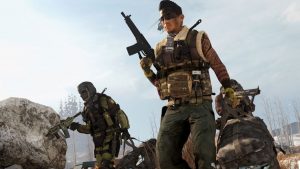