Der Anfang is a brand-new Zombies map coming to Call of Duty Vanguard, and the latest chapter in the continuing Dark Aether storyline.

Vanguard is almost upon us, and now Treyarch has shared new information on the Vanguard Zombies map, Der Anfang.

Although the trailer leaked earlier today, Treyarch has shared additional information on what players can expect from the new map.

Treyarch has stated that Der Anfang is a story long-time players will appreciate, but will also be easy for new players to pick up and play.

And with Treyarch taking the helm on Vanguard Zombies, and continuing the Dark Aether Story, fans are excited to see how it matches up!

Although events were somewhat concluded with the recent Black Ops Cold War Forsaken Main Questline, the events in Vanguard will represent a new arc for Zombies.

The official reveal trailer for Vanguard Zombies’ Der Anfang map is here, and with it come some exciting additions to the Zombies franchise.

Firstly, players were given a glimpse into the world of Vanguard Zombies, with Call of Duty’s official reveal trailer.

Interestingly, Der Anfang centers around the mystical and the occult. Alongside this is a gritty and morbid atmosphere featuring piles of dead Soviet and German soldiers.

According to Treyarch, Vanguard Zombies will take the best bits from Cold War, such as Outbreak Mode, and elevate this even further.

There are five Dark Aether Entities linked to these artifacts: Kortifex the deathless, Saraxis the shadow, Norticus the conquerer, Inviktor the destroyer, and Bellekar the warlock.

Unfortunately, Kortifex, the most powerful of the Dark Aether entities, is in the hands of the enemy in Der Anfang!

Oberführer Von List, the head of an evil Nazi regiment is granted the power to raise the dead through his bond with Kortifex.

Therefore, it’s up to players to put a stop to this evil, before Von List can raise an undead army, and annihilate the Allied Forces.

However, be warned, these entities might appear to be helping the Vanguard Operators, but they also have their own dark agendas…

The latest Zombies map will center around Stalingrad, in the aftermath of Germany’s most recent defeat.

Treyarch has paid special attention to ensure that map locations are varied and unique. Against the backdrop of a bitter winter in Stalingrad, Vanguard’s Operators will also attempt to deal with the mystical and a powerful evil force.

Alongside this, as players explore the map, they will come across shrines, rituals, sacrifices, and more! To keep things nice and unsettling.

As for locations, players will fight on the rainy rooftops of the Hotel Royal, Merville & even the Swamps of Shima No Numa!

Regarding Zombies, players will encounter some familiar foes, from regular undead Soviet and German soldiers to big hulking heavies. However, Vanguard Zombies is introducing a new Zombie type in the Boom Schreier, a loud, volatile, and explosive enemy!

long-time COD Zombies fans can rest easy in the knowledge that the Pack-A-Punch, Mystery Box & Crafting Table are all here to stay in Der Anfang.

However, a new change to Perk Machines in Vanguard Zombies is in Perk Fountains. As players complete various challenges they will unlock new areas, containing new perks and more goodies!

Also, Runes are also brand-new addition to Call of Duty Zombies. Currently, we know very little about what they do, but according to Treyarch, they will play a vital part in the continuing story.

Additionally, there is also the Altar of Covenance, a brand-new mechanic which introduces new means of obtaining power.

The Altar will offer upgrades such as Brain Rot, Ammo Gremlin & Death Blow in exchange for Sacrificial Hearts.

Similarly, there are even new challenges in Vanguard Zombies Der Anfang map. Blitz, Harvest & Transmit are amongst a few of these new objectives.

And that’s about it for the official reveal of Vanguard Zombies’ Der Anfang. If you’re excited to jump into Vanguard once it launches and you’re a PlayStation user, make sure you check out this exclusive content.

Finally, Vanguard is currently causing problems for Warzone players, with Vanguard’s weapons having this major fault with them. 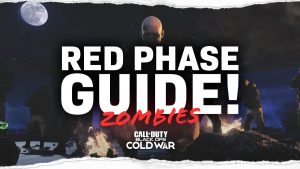 Terra Maledicta: How to Get the Ray Gun - Vanguard Zombies

Der Anfang: How to Exfil in Vanguard Zombies