New episodes premiere every week on Sunday. You can look at the entire episode list and release schedule here.

The first episode premiered with plenty of praise from viewers and a 100% critic rating on Rotten Tomatoes.

The Last of Us “The Weeks Ahead” Trailer

Here is the official HBO Max trailer for future episodes of The Last of Us, ‘The Weeks Ahead.’

The Last of Us Episode 2 Length

The Last of Us Episode 2, Infected, has a runtime of 55 minutes. It is the first episode directed by Neil Druckmann, the writer of the original series by Naughty Dog.

The first episode had a runtime of 1 hour and 25 minutes. This isn’t too unusual for a series premiere. Usually, the first episode is necessary to set up the series and provide much-needed exposition on the different characters and environments.

The Last of Us introduces us to plenty of its incredible cast in the first episode, but fans of the video game are likely to see more familiar faces in episode 2.

What to Expect in Episode 2 of The Last of Us

Viewers can expect a deeper look into Joel and Ellie’s relationship and the virus that ravished the nation in episode 2, Infected.

Episode 1 ended with Joel and Tess escorting Ellie outside the Boston quarantine zone.

It gave us a glimpse of what we could expect from the terrible virus that has pushed the world to the brink, but in Episode 2, we’ll likely see the trio encounter these fungal creatures more closely.

We’ll also get out very first look at the world outside the quarantine zone. Joel and Tess are tasked with escorting Ellie to the Massachusetts State House.

It’ll be interesting to see how the trio reacts to the world around them and how it affects their relationships. They’ll also likely get their first taste of the dangers looming outside the quarantine zone and FEDRA.

What Song Is Playing in the End Credits of Season 1 Episode 4 of The Last of Us?

Where Is The Last of Us Season 1 Episode 4 Set? 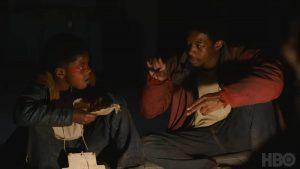 What Is Kathleen & Perry Hiding in The Last of Us Episode 4?…