Splatoon 3 has a series of new idols to meet, but who exactly are Deep Cut?

From the Squid Sisters to Off the Hook, Splatoon idols are always a fan-favorite part of the game. In the world of Splatoon, Turf Wars are a popular pastime, pitting teams of Inklings (and Octolings) against one another with the aim of painting a stage.

With each new game, we get introduced to two new music idols, who advertise Turf Wars and announce the available modes and stages each day. They will also pick sides in Splatfests, asking players to do the same.

The original Splatoon introduced us to Callie and Marie, the Squid Sisters. Splatoon 2 later followed up with Pearl and Marina, AKA Off the Hook.

Now Splatoon 3 has (for the first time ever) 3 unique idols to meet, known collectively as Deep Cut. Here’s everything we know about them:

Who Are the Splatoon 3 Idols?

The Splatoon 3 idols are Shiver, Frye, and Big Man, who are together known as Deep Cut.

“You think you’re cool? Sharks call ME cold-blooded. But you can call me Shiver!”

Shiver is our second-ever Octoling host in the Splatoon franchise. The idol’s signature color is blue, and their right ear is pierced with three shark tooth-shaped earrings, perhaps as a reference to their intro line above.

One eye is covered entirely by a tentacle at all times, and Shiver wears a translucent purple shawl, complete with a stylish octopus charm.

Is Shiver a Girl?

Yes, Shiver has now been confirmed to be female. Initially though, promotional material and dialogue didn’t specifically refer to Shiver’s gender in any language (unlike it did with co-hosts Frye and Big Man) leading fans to believe that the character could be non-binary.

According to Nate Bihldorff, Nintendo’s SVP of development and publishing, Shiver identifies as female. To cement this fact, the idol’s she/her pronouns do appear in-game.

“Say it with sizzle… I’m Frye”

Frye boasts golden eyes to match her yellow theme, though her tentacle-tips are a deep purple. She wears a yellow translucent shawl, over the top of a yellow turtleneck crop top, which she styles with some baggy white pants.

Interestingly, the idol also wears a gold, chunky hat that resembles fried food of some sort, reflecting her name.

Big Man is our first host that’s neither an Inkling, nor an Octoling. The Manta Ray co-host speaks only by saying the word ‘Ay!’, though a translation reveals his intent immediately afterwards.

His signature colors are black and red, and he wears only a headband.

Together, these three band members make up Deep Cut, and the idol group has currently debuted two songs: ‘Anarchy Rainbow’ and a cover of ‘Now or Never!’

Just can’t wait to get your hands on the game? Here’s where to pre-order Splatoon 3 for the best bonuses! 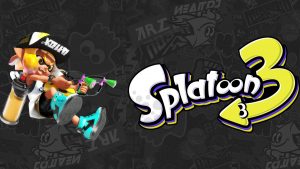