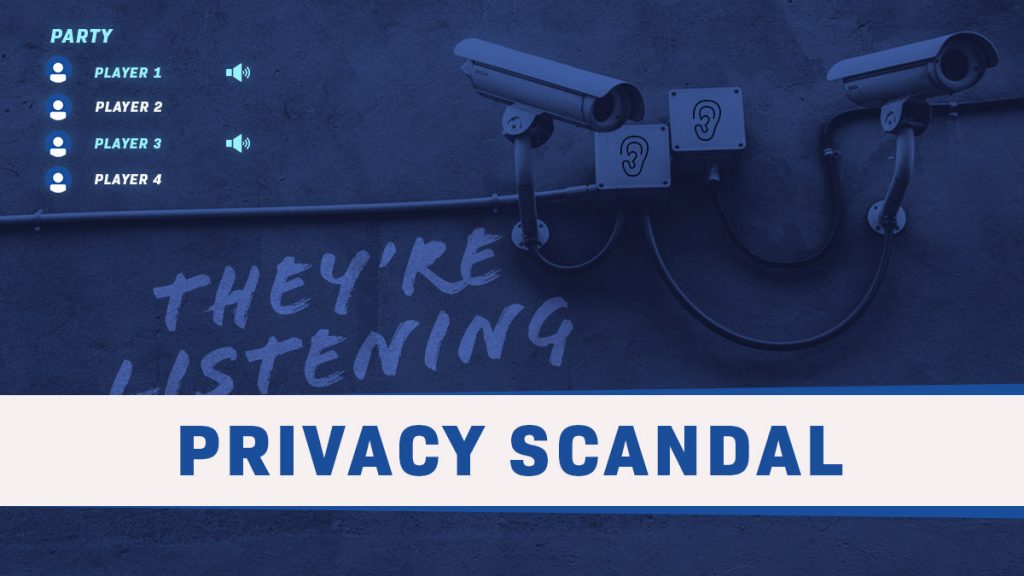 Sony faces a fan backlash after the latest PlayStation update leaves players open to having their voices recorded in PS4 Party Chats. It’s expected that this new rule will carry over to PS5 next month.

PS4 owners will have noticed a new update was required this week, bringing a selection of new features and changes. Created in anticipation of the PS5’s launch, Sony is preparing to bring both consoles in line with each other.

The idea behind system update 8.00 is to create some consistency and synchronicity between both consoles. This way players will be able to seamlessly transition from PS4 to PS5 when the time comes.

The update gives us an insight into how certain features will function on PS5. But not all the changes are welcome. Especially the changes to Party Chat.

Why Are Some Players Outraged?

Once the update is installed, and players attempt to access Party Chat, they will be greeted with a new notification:

This message at first looks like the typical pop up seen before joining any form of online chat. But this one contains a rather worrying development.

It appears that from now on, all Party Chats on PS4 (and PS5) will be recorded. And presumably, the data is stored and owned by Sony.

While this may be an innocent attempt to improve their service, it raises more than a few issues. Mainly relating to privacy rights and freedom of speech.

Sony have seemingly avoided any legal issues by getting customers to agree first. Something they're forced to do when they log in.

Giving users the illusion of choice has been described by some as "a forced invasion of privacy".

Why Has This Been Added By Sony?

While the above message seems clear enough, Sony are trying to reduce toxicity among gamers. Which would be a noble cause, and one we can all get behind...

But here's the problem: The disclaimer that pops up when you log into Party Chat is a large wall of text, and Sony are banking on the majority of players just ignoring it.

If Sony's true objective is to reduce toxicity and make the world a nicer place, then why was none of that communicated in update notes?

Even if Sony shouted this intention from the rooftops, seeking to end toxicity forever; we're not convinced this is an effective way to go about it. Or even, dare we say, the most morally right way.

Do Party Chats even need to be policed? Sony say this is to make sure players are abiding by their behavioural rules, so essentially it exists to stop gamers from hurling abuse at each other.

Sony wants to make sure players are not engaging in hate speech. Or other forms of behavior that could be deemed offensive.

This would make sense if it was enforced in open public spaces, but Party Chats are typically invitation only.

Party Chat on a game is comparable to a party in real life. You invite people to your home because your enjoy their company.

If they behave poorly and become abusive you kick them out. At no point is a microphone or governing body required to aid or oversee this.

Sony appear to be pretending that Party Chat is some public forum. When in reality, its very purpose is for a select group play games privately.

The only argument is that players are voluntarily using Sony's platform, and therefore must stick to their rules. But Sony's platform happens to be sitting in our homes, so this argument doesn't stand up to scrutiny.

Our homes are private spaces, and nobody has the right to insist on recording us. Sony, is our guest, not the other way around.

Friends or gaming buddies in Party Chat don’t tend to abuse one another, and this will create a problem with context. How exactly will Sony decide what’s banter and what’s abuse?

The whole thing is decidedly Orwellian, with Sony playing the role of Big Brother. They are ultimately telling gamers; that they get to decide what’s acceptable to say and what isn’t – in other people's homes.

Most gamers who value decency would agree there should be no tolerance for hate speech and harassment when gaming online. But if we want to swear in the comfort of our own homes, surely that’s our choice?

Issues like Gamergate and various other stories demonstrate that gaming does have an issue with toxic behaviour. Be it gatekeeping on social media or that one kid on COD who’s allegedly had carnal relations with the opposite team’s maternal family members...

We’ve all seen and heard it, but the majority of us can laugh it off. The way we fix this toxicity problem is by taking a stand against it, by educating people about what’s acceptable and what isn’t – Not surveillance and censorship.

Toxicity within the community is one of the things that’s holding gaming back from being the legitimate art form we all know it should be seen as.

But encroaching on the rights of those who engage in it is unlikely to help the perception of gaming and indeed, gamers themselves.

Let’s not forget gaming does enflame. Gamers can get angry, excited, passionate and a range of other emotions. This can influence behaviour in different ways, but it doesn't necessarily reflect real life.

We play games to relax and escape from the pressures of the world. Constantly worrying about what we say in Party Chats is surely going to be detrimental to that?

Platforms like our own have an obligation to report facts on a impartial basis, and we shall continue to do so. But we must stress we are gamers too, and invasions of privacy impact us all.

Sony's recent update does indeed risk being this. The company need to ask themselves why are Microsoft, Nintendo, Steam, Stadia etc all not implementing something similar? We'll tell you why; it would be perceived as an invasion of privacy.

Microsoft have fallen foul of this before when they tried releasing a device that recorded Xbox One customer's living rooms, even when it was not in use.

There's a reason why Kinect went the way of the dinosaurs, it arguably damaged the Xbox One irreparably. Sony need to be careful to not fall into that trap.

Privacy is something everyone is entitled to in their own home. Whether they choose to broadcast themselves online in some form doesn’t change that.

Gaming is something people do, mostly, at home. So a company attempting to assert even the smallest amount of control over what we say while we’re there, raises some rather controversial questions.

Be it about ethics, human rights or ownership of data, the backlash against this decision is unlikely to go away anytime soon. On the other hand, we know we’re monitored in everything else that we do, not that it gives Sony the right to take this further.

For example, our phone calls, text chats, etc are all recorded. In fact, we probably can’t walk to the store without getting caught on multiple CCTV cameras.

We all carry around mobile smartphones which can, and often do, transmit our exact location all around the world. When we log into search engines like Google, our data is constantly monitored and sold to advertisers.

We’re used to being watched, and many of us just accept it. But there’s something about monitoring our conversations with our friends, while we sit on the couch and relax that just seems too far.

What’s The Solution To The Party Chat Controversy?

Honestly? We’re don’t know. We agree that more needs to be done to encourage gamers to play nice, but we also understand why people are frustrated.

‘If it isn’t broke, don’t fix it’ springs to mind. But we’re not so sure if it is broke or not.

Maintaining the status quo could go either way, things could get worse or they could improve. But doing so by force just doesn’t feel right.

Just like Microsoft made a mistake with Kinect, we strongly suspect that Sony is now doing something similar.

There's a month between now and when the PS5 releases, and Sony may need to re-think this strategy.

Gamers need to fight against this sort of practice. The more it's allowed, the worse it will get. If the intention is to fight toxicity, then find another way.

Practises like these open the door to more things reminiscent of 1984, a story which the Government installed cameras in people’s homes.

But Sony isn’t the Government and the PlayStation Network is their platform. It may seem like they have the right to run it however they like, but they don't.

The issue is when it starts interfering with the rights of their customers. And with PS4 update 8.00, they may have just crossed the metaphorical gaming Rubicon.

Sony's justification can be found here.

It is important to note that since writing this article, PlayStation has officially addressed fan concerns regarding the recording of party chats.

How to Transfer Games to a PS5 External Hard Drive