A new MW2 Recon Drone glitch allows you to permanently ping an enemy for an entire game, enabling you to see them through walls. Here’s how it’s done.

Glitches seem to be popping up all over the place in Modern Warfare 2 and Warzone 2. Fortunately, they seem to be benefiting players rather than inconveniencing them.

One such glitch allows players to track an enemy player for the entire game, essentially giving them the infamous wallhack cheat.

This isn’t the only glitch that allows players to spot their enemies with ease. In fact, you can also get unlimited UAVs in Warzone 2 for an entire game.

How to Do the Recon Drone Wallhack Ping Glitch in MW2?

If you want to replicate this wallhack ping glitch for yourself, you’ll need to equip the Recon Drone in your Field Upgrades.

Next, activate your Recon Drone (L2 + R2 on console and X on PC), and then mark an enemy by hovering over them and manually pinging them (up on the D-Pad or middle mouse button).

Here are the exact steps you need to take in order to pull off this wallhack ping glitch in MW2:

In some players’ experience, this glitch permanently marked their enemies, even after they’d respawned. It allowed them to see pinged enemies through walls and from a distance during the entire round.

Some players have reported that it also works with the Tactical Camera Field Upgrade. After throwing it, you need to manually control it (press the Field Upgrade button a second time) and then ping the enemy.

It is worth noting that in our experience on both PC and console, this glitch did not work. Nevertheless, there are enough players reporting its success on Reddit that it is worth trying for yourself

Has the Recon Drone Wallhack Ping Glitch Been Removed from MW2?

If you’re trying the wallhack ping glitch in MW2 and it isn’t working, it is likely that it has been patched out of the game entirely.

Like with all glitches, you can see whether or not it is being fixed by checking the MW2 Trello Board. It details all known issues that Infinity Ward is working on.

However, certain players on Reddit have noted that this glitch was also around during launch and has seemingly reappeared now. So, it is possible it will return in the future if it isn’t working now. 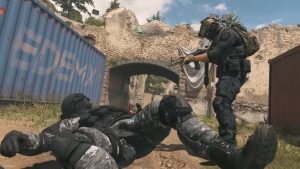