Pokemon Legends: Arceus is finally here, and debates about the game’s graphics are still dominating the internet.

Pokemon fans just got the open-world adventure we’ve been waiting for, and yet something doesn’t feel right. For the most part, the game is an incredible experience, with plenty to love.

But fans are still hyper-focusing over Pokemon Legends’ biggest drawback: its graphics. It’s clear when looking at the game that Pokemon Legends: Arceus isn’t the most graphically impressive title on the Nintendo Switch.

In fact, just comparing it to The Legend of Zelda: Breath of the Wild makes it obvious which game does open-world environments better. Early rumors suggested that Arceus would get a massive upgrade on Nintendo Switch Pro – but we all remember how that panned out.

That said, in its finest moments, Pokemon Legends isn’t a bad-looking game. And while the graphics in Arceus could certainly be improved, they’re not as bad as compressed YouTube footage makes out.

Pokemon Legends: Arceus – How Bad Are the Graphics?

How bad are the Pokemon Legends: Arceus graphics at launch, you ask? Better than you expected, worse than you hoped.

Pokemon Legends has an emphasis on Pokemon, and that’s the way the game should be. Models of the creatures look great, and you can even encounter giant Pokemon thanks to random sizes in-game.

Each creature has unique animations and can be summoned at any time, something that helps the game feel alive.

What doesn’t help matters is the poor draw distance that has the game’s poor environments looking barren and devoid of life. Visually, Arceus doesn’t look bad, but it’s clear that it’s being hindered by the Nintendo Switch‘s poor performance.

Although we’d have loved to see the 4K Nintendo Switch Pro make an appearance, it seems that won’t ever happen. Reports indicate that Nintendo is hard at work making its next console, but it’s certainly late to the next-gen game, as always.

Will these 10 most anticipated Switch games look better than Pokemon Legends on release? The answer: very possibly yes.

After all, despite Pokemon’s success as a franchise, its development team at Game Freak isn’t massive. And just looking at this gorgeous Kirby and the Forgotten Land trailer, there are a lot of teams doing good work under the Nintendo banner right now.

Now that Mario Kart 9 is reportedly in development, we expect that to be another jaw-dropping game that pushes the limits of the Nintendo Switch. It’s just a shame that Arceus couldn’t get that boost it needed to be a visual marvel too. 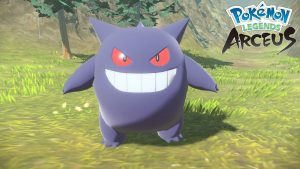