The Mythical Deoxys has 4 different Formes in Pokemon GO – Normal, Attack, Defense, and Speed – but which Deoxys Forme is best?

There are hundreds of different Pokemon in Pokemon GO but Deoxys is certainly one of the most unique. This is because it comes in 4 different Formes.

However, with Remote Raid Passes being especially hard to get in Pokemon GO, you may not be able to take part in enough 5-Star Raids to catch every Deoxys Forme.

Here’s an explanation on which Deoxys Forme is best so you can save your Raid Passes and use your Candy to power up the strongest one!

Every Deoxys Forme in Pokemon GO

There are four Formes of Deoxys in Pokemon GO – Normal, Attack, Defense, and Speed. Each of these Formes has different appearances and stats, meaning that some are better than others.

Find out how to get more Candy in Pokemon GO so you can power up your Deoxys for the GO Battle League!

What is the Best Deoxys Forme?

The best Deoxys Forme in Pokemon GO is Defense Forme Deoxys. It has a huge amount of defense and some good attacks like Counter which make it a viable option in the GO Battle League.

Check out our Pokemon GO Deoxys Raid Guide to find out how to beat every Deoxys Forme in Pokemon GO!

On the other hand, the other Deoxys Formes aren’t worth using in PvP. Normal Forme and Speed Forme are reasonably well-rounded, but far from powerful, while Attack Forme Deoxys does loads of damage but can be taken down very easily, thanks to its measly defense.

These are all of the stats for every Deoxys Forme in Pokemon GO. Also remember to use the Pokemon GO IV search filter to find out which Deoxys you have is the best to power up!

Pokemon GO: How to Complete A Cosmic Companion Research
3

How to Catch Mareanie in Pokemon GO - Is There a Shiny?
5 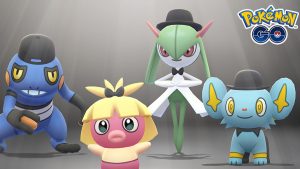 Pokemon GO: How to Complete A Cosmic Companion Research…