A new Pokemon GO datamine has revealed that the Galarian forms of the Legendary Birds will be coming to the game as well as shown the first look at Cowboy Hat Snorlax!

Pokemon GO players are always looking forward to new upcoming Pokemon and it looks like the Season of GO will have plenty of them.

In addition to a new fan-favorite Mega Pokemon, there should be plenty more Pokemon making their debuts later on in the season.

Some of these are confirmed like the three brand-new Ultra Beasts coming to Pokemon GO Fests while others have been revealed by datamines.

Now, the latest Pokemon GO datamine has revealed that the Galarian forms of classic Pokemon Legendaries are on the way. Check out what they’ll look like in-game below!

A previous Pokemon GO datamine has already revealed that a new form of ultra-rare Pokemon will be coming soon. However, this isn’t the only different form of a popular ‘Mon that will be arriving in the near future.

PokeMiners has been looking through the Pokemon GO game files and found a few very exciting new additions.

While Articuno, Zapdos, and Moltres have been in Pokemon GO for years now, their Galarian forms have not arrived in the game yet. However, it looks like they could be on the way very soon.

The datamine has not only hinted that the Galaraian versions of the Legendary Birds should be coming to the game soon, but also shows what they will look like in-game.

Plus, it also gives players a first glimpse of Cowboy Hat Snorlax.

Let’s hope to see some official announcements from Niantic about the Galar regional variants of Articuno, Zapdos, and Moltres soon.

Check out what these new Pokemon look like in-game below. The Galarian Legendary Birds will hopefully be arriving later in the Season of GO alongside over 50 new Pokemon!

In other news, make sure you know how to catch the new Pokemon GO Ultra Beasts! There are three new ones that will be coming to the game very soon!

Also, you can now catch shiny Meltan in Pokemon GO for a limited time! You’ll want to act fast though, as time is already running out.

I'm selling pokemon cards from the 90s to 20s 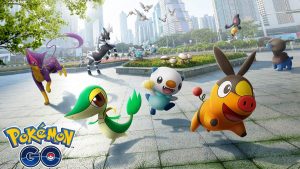