The latest Pokemon GO update has finally added an IV filter to help you search for Pokemon – here’s how you can use it!

Most Pokemon GO players have hundreds if not thousands of Pokemon in their Storage so they need quick and simple ways to search through them.

While players have always been able to filter Pokemon by some properties like type and region, many fans have been waiting for a way to filter their Pokemon by IV values.

Luckily, Niantic has finally added the feature in the latest Pokemon GO update. Here’s how you can do it!

This is the most useful update since Niantic added the Buddy and Egg Widget for Pokemon GO!

What is IV in Pokemon GO?

Individual Values (or IV) in the Pokemon series are used to measure how powerful your Pokemon are.

In Pokemon GO, the Attack, Defense, and Stamina of your Pokemon are measured out of 15. You can check this by appraising individual Pokemon and seeing the bars for each of these stats.

It’s also important to note that IVs can’t be changed in Pokemon GO unless you trade the Pokemon. This means you’ll only really want to evolve or power up Pokemon with high IVs even if their CP isn’t too high as their CP potential will be higher.

Although, some players trade by themselves in Pokemon GO to give their Pokemon higher IVs easily!

This is why the new IV filter will be so useful for Pokemon GO players as it’ll let them find their powerful (and not so powerful) Pokemon much faster.

Here’s how you can use the new IV filters in Pokemon GO!

How to Search for Pokemon Using IV Filter in Pokemon GO

At the moment, searching by IV is only available for Pokemon GO players on Android who have the 0.243.0 version of the game installed. This update should be available for everyone on all devices very shortly!

Now that you know which of your Pokemon have great IVs, find out how to get Elite Fast and Charged TMs in Pokemon GO. These attacks will make your Pokemon even stronger!

In other news, if you want to power up your Pokemon to a high level, you’ll need lots of Candy. Here’s the fastest way to get XL Candy in Pokemon GO! 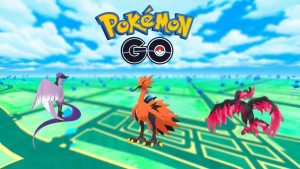