Put on your best loot, and set up your build, as we give you our full review of Outriders Worldslayer.

Full disclosure for you. I really enjoyed Outriders when it launched last year. Despite a mediocre narrative and some performance issues, Outriders had some incredible gameplay, a decent loot pool, and great builds. If you’re hoping that Worldslayer will change Outriders enough for you to enjoy it, you may be disheartened. But for those who enjoyed Outriders, read on, as you may enjoy Worldslayer.

For those unaware, Outriders is a looter shooter that offers a selection of four classes, each with distinctive and chaotic abilities, and plenty of guns to use. Unlike many looter shooters, Outriders isn’t a live service experience. At launch, Outriders was praised for its solid gameplay, and decent build options, but was criticized for its shallow story, along with its performance issues and plenty of bugs. Since its launch, developer People Can Fly has updated the game, with a free major update called New Horizons patching the experience up.

Similar to the story found in the base game, Worldslayer’s strength doesn’t lie in the plot, in fact, far from it. Worldslayer is best when it focuses on what makes Outriders great; the gameplay.

Outriders: Worldslayer follows directly on from the base story. The Outrider (your player character) and his rag-tag team of friends are tasked with figuring out why the Anomaly (a storm that converts some people to super-powered Altered like yourself) is getting worse. That means getting past an enemy faction’s frontlines and having to take on Ereshkigal, the leader of the enemy faction, another Altered who has a super-powered ego.

Worldslayer’s narrative adds around seven hours of story-based content, which is mostly paper-thin. While Worldslayer does a good job at cleaning up some of the loose ends that Outriders’ story left undone, it doesn’t amount to much. There are moments of interesting plot threads, like how being super-powered can affect your outlook, but they aren’t followed too deeply. Similar to the story found in the base game, Worldslayer’s strength doesn’t lie in the plot, in fact, far from it. Worldslayer is best when it focuses on what makes Outriders great; the gameplay.

Getting a good set of mods on an Apocalypse weapon or armor can make the gameplay even more chaotic and interesting.

This expansion adds in many features, or changes existing ones to further improve and streamline Outriders’ looter shooter RPG-lite gameplay. There’s a lot to talk about here, and a few boxes to tick off, so we’ll take it one at a time. Firstly, there’s the introduction of Apocalypse Tiers. Outriders used a system called World Tiers within the base game, which are increasingly difficult tiers that offer more loot at the cost of a harder challenge. However, players could switch up and down through tiers if they found themselves struggling to keep up.

Apocalypse Tiers replaces World Tiers but offers an increased cap to 40 tiers, as well as the chance to get some new gear. That’s right, not only does Worldslayer offer some new gear in the already expansive loot pool, but there’s a chance to get gear aptly titled Apocalypse Gear. Rather than offering two mod slots like standard gear, Apocalypse Gear offers three slots. While the third slot can offer some interesting mods, it is completely unalterable, so you’re at the grace of RNG in the hopes of a decent third mod.

But the Apocalypse Gear leans into what makes Outriders’ gameplay so fun. Not only are super abilities satisfying to use, but the different mods available can make the experience more gratifying. Getting a good set of mods on an Apocalypse weapon or armor can make the gameplay even more chaotic and interesting. And thanks to the crafting system, a third mod means more opportunities to dismantle and put mods on other weapons. Fortunately, both Apocalypse Tiers and the gear linked to them are accessible via both Worldslayer and the standard version of Outriders.

However, it’ll take a long time before you’ll see any major differences when putting Ascension points into any of Ascension’s 20 different options.

Of course, more Apocalypse Tiers means higher difficulties, but Worldslayer introduces new options to deal with the challenge. Firstly, there’s the PAX system, which allows players to further progress their builds into one of two new trees per class. PAX Points are limited to five per class, meaning you won’t be able to mix PAX trees, but the payoff is that you can get some great upgrades when you finish a tree. Alongside that, Worldslayer introduces Ascension levels, which offer a variety of smaller upgrades (1% extra health, 0.5% weapon leech, etc.) that are likely to add up to something more meaningful. However, it’ll take a long time before you’ll see any major differences when putting Ascension points into any of Ascension’s 20 different options.

But why does Worldslayer offer all of these upgrades and reworks to Outriders’ existing systems? Well, it all leads to the Trials of Tarya Gratar. This new endgame exists alongside the base endgame, Expeditions. Tarya Gratar is a huge “dungeon” that can be extremely difficult but offers plenty (and I mean plenty) of loot to get your grips on. There are a few boss fights, that are practically filled with epic to legendary loot, and with Apocalypse Tiers, you’re likely to get some decent loot that you’ll want for your build.

The other issue with Tarya Gratar is that it will get repetitive, fast.

But Tarya Gratar does a lot more than simply offering new ways to get loot. In fact, the Trials of Tarya Gratar actually solve a lot of Outriders’ existing endgame problems by handling loot in a better way. Tarya Gratar has a main path through, leading to a few major boss fights that are unique encounters for Tarya Gratar. But there are also some side paths, called Troves, that are equally difficult but tell you on the map what loot can be offered. This entices players to do replays, attempting Troves in the hopes of getting set loot they need for their build, but without negating the RNG and fun of a looter shooter.

The aforementioned boss fights within the walls of Tarya Gratar hold some interesting mechanics on their own. Unlike the constant hordes you manage during the main game, you’ll be tasked with stopping minions from healing a boss, or avoiding attacks that can lock your powers for a few moments, putting you in a position that could be fatal. What makes it even more challenging is that Tarya Gratar limits you to three attempts per run, raising the stakes. Unfortunately, there’s zero connection to these bosses, making their unique mechanics less interesting by default. If Outriders had a good story and invested more in its lore, the boss fights could be both meaningful and interesting.

The other issue with Tarya Gratar is that it will get repetitive, fast. Unlike many dungeon-like experiences, Tarya Grater is not procedurally generated. You’ll see the same halls, same rooms, and the same bosses over again until you either get the loot you want and move on to a different character or get tired of it anyway. It’s not a huge issue, but it is one that needs to be mentioned. Each run could take an hour or more, depending on difficulty, so it’s fair to say that you won’t be encountering the rooms too often, but worth noting for any players who were hoping to have a different and endless experience.

Worldslayer is a highlight reel of what makes Outriders great.

Performance-wise, Worldslayer had some issues on PC. There wasn’t anything major, but frame drops and lag occurred frequently, even in a single-player experience. Similar issues have plagued Outriders since launch, and while many have been patched by People Can Fly, it seems that some problems are sticking around. It’s unlikely to affect your playthrough too much, but those with lower-end PCs may suffer more performance drops.

Outriders’ Worldslayer expansion is very much a traditional DLC. It doesn’t outright change the original experience that it becomes a different game entirely, but it does fix up some existing issues while offering new experiences throughout. People Can Fly doubled down on the chaos, offering more mod slots on some gear, more skill trees and upgrades, a new story, and a completely new endgame to boot, but it doesn’t offer a quality narrative.

Worldslayer is a highlight reel of what makes Outriders great. Everything that makes the gameplay tick is turned up to 11, offering new ways to change your build and how you’ll deal with the constant hordes of enemies you’ll face. But the plot is thin and leaves another cliffhanger that may or may not be dealt with depending on how well Worldslayer sells. If you’ve never played Outriders, and want to dive in, this truly is the full package and is certainly a great time if you’re looking to mindlessly kill enemies, and feed your power fantasy. Or if you loved Outriders, it’s simply more Outriders. However, those who didn’t enjoy the base game won’t fall in love with Worldslayer.

A code was provided by the Publisher for the purposes of this review.

Outriders: Worldslayer Review
Conclusion
Outriders: Worldslayer can be boiled down to "more Outriders". It's a highlight reel of what makes Outriders so fun, tightening the combat, gameplay and build to it's best yet. And with an exciting endgame too. But those who didn't enjoy the base game won't find anything new to love here.
PROS
New Apocalypse Tiers and Gear make the gameplay more chaotic than ever
Trials of Tarya Gratar make the endgame better, and easier to create builds
The solid gameplay of Outriders is as fun as it has ever been
CONS
Weak plot that leaves the game on a cliffhanger
Performance issues popped up a fair few times during the experience
Those who didn't enjoy Outriders won't be changed with Worldslayer
7
Reviewed on PC
Share your thoughts, or ask a question:
Comments 0 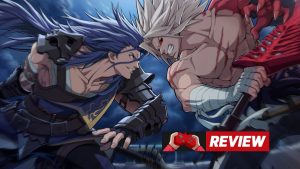