Third-Person POV is once again back to Call of Duty with MW2 after being absent for the last few titles.

Back in the original Modern Warfare 2, players could choose to play in specific third-person playlists that completely changed the way they play.

The new camera mode gives players a different perspective that requires the player to be more aware of their surroundings.

Here are all the details you need to know about the third-person POV coming in Modern Warfare 2.

What is 3rd Person POV in Modern Warfare 2?

Third-Person POV is a new behind-the-player camera point-of-view in MW2, which gives gamers a complete view of their operator and a wider view of their surroundings.

Although when you aim down the sights, it does bring your perspective back into First-Person mode.

With complete control over the camera, you’ll be able to adjust your view to look around in areas that you would never be able to in First-Person POV.

This will make it easier for you to shoot around corners and flank other operators. It also gives you a better view of your Operator and exclusive skins you may have unlocked.

Can Players Swap to Third-Person POV During a Match?

What Modes Are Available in Third-Person in MW2

Third-Person POV is available for the following modes:

There is also a Third-Person Moshpit playlist that players can jump on to try a variety of the Third-Person POV modes in MW2.

Third-Person POV in MW2 is a modifier that can be switched on any mode. As Modern Warfare 2 progresses through different seasons, it is likely we’ll see a variety of modes get the 3rd Person treatment.

Infinity Ward has even mentioned trying it in a Battle Royale setting.

You’ll be able to use all of the same weapons, though, so any progression you unlock for the Modern Warfare 2 Gunsmith will be seamless between modes. 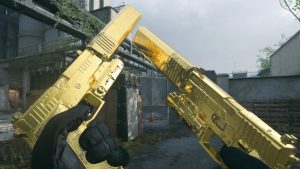