To complete the Atomgrad Raid, you’ll need to get your hand on a Raid Code. Here is everything you and your squad need to do to grab the Raid Code and complete the mission.

The first thing you’ll need is a squad to play with. There is no matchmaking, and you can’t complete it alone.

Every code in the MW2 Atomgrad Raid is randomly generated so you won’t find it anywhere online. Thankfully, we have the best method to quickly find it in-game by doing the following steps:

Before you head out, it’s important to grab a Raid Assignment first, or you won’t be able to access the MW2 Season 1 Atomgrad Raid.

Once you have your Raid Assignment and a full squad, follow these steps to obtain all the necessary Raid Codes in Modern Warfare 2:

Once you’ve done this three times, you’ll need to head back into the water, and two massive metal doors will begin to open.

How to Easily Navigate the Underwater Tunnels in Atomgrad Raid

To easily navigate the underwater tunnels in the Atomgrad Raid, you’ll need to pick up the Oxygen Tank and pass it around between players while avoiding the scattered tripwire.

Players need to move about this underwater maze with care since if the player with the Oxygen Tank is killed by the tripwire, then the other two players will likely die from lack of oxygen.

This is the final area of the raid and where you’ll need to enter the second raid code in the Atomgrad Raid.

How to Find Second Raid Code in MW2 Atomgrad Raid

Players must decipher the second raid code and input it while fighting off enemy soldiers in three locations.

This is the last part of the Atomgrad Raid and requires every player to hold their own while communicating with each other to input all three ciphers. 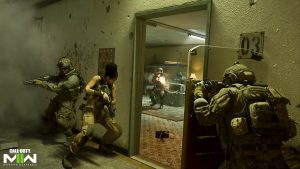