The demo has arrived, but do you know how Monster Hunter Rise's mounting system works? Here are our tips and tricks to hone your skills as a hunter.

The MH Rise demo has just dropped, despite it causing some problems for the Nintendo Eshop.

Players are enjoying the demo thus far, despite its limitations. However, despite this, some users have found a way around these restraints.

You can read our guide here on how to play the Monster Hunter Rise demo forever. You won't have to stop fine-tuning your hunting skills before the game's release.

During your time with the demo, you're going to want to get to grips with all the weapons and playstyles available to you.

However, there's one mechanic you might not be aware of. Did you know that Monster Hunter Rise features a brand-new mounting system?

Mounting has been a part of the series for a long time, however, Monster Hunter Rise features an updated mounting system.

This new system opens up more ways to tackle larger monsters. The traditional method involves using aerial attacks in order to weaken a monster enough to perform a successful mount.

Once enough aerial damage has been inflicted, performing another aerial attack puts the player into a mini-game where they have to balance stamina and dealing enough damage to topple the monster.

However, in Rise, you'll be able to make use of the new Wirebug mechanic. This feature allows players to effortlessly perform aerial movement which can also damage foes.

You can see the official Monster Hunter Youtube channel guide on how Wyvern Riding works just below:

Monster Hunter Rise's mounting mechanic is a little bit more complex than past iterations of the game.

Another method available to players is using Puppet Spiders. Sounds kind of gross right? This is an item that allows the player to trap monsters in Ironsilk.

However, Puppet Spiders are a limited resource. If you run out you'll have to find more around the map.

Simply place these spiders on the ground and it will shoot Ironsilk at your unfortunate foe.

Once the monster is ensnared, attack from above or press the A button if your weapon is sheathed to perform a mount.

Once you're actually riding your target you'll want to switch up moving the target, attacking and also guiding the monster into walls and other objects.

You'll notice as you use the mounted monster to wreak havoc on other monsters, you'll be building up your Wyvern Riding gauge.

You'll want to perform a finisher once this gauge is full in order to topple the monster and put it in a vulnerable state. whilst also keeping an eye on your timer.

Pressing the R button allows you to hold on to the monster if it attempts to throw you around.

All of which will build up your Wyvern Gauge enabling you to perform your takedown finisher.

However, another method involves launching monsters. In order to launch a monster using the new mounting system, you'll need to press Y when facing a wall.

This will allow the player to send the monster hurtling towards obstacles, dealing damage to them and weakening them for a follow up finishing move.

If you do this enough times, or enough damage has been inflicted this can topple the monster without you having to initiate a mounted finisher move.

However, just make sure you are paying attention to your riding gauge as you'll be thrown off if you can't topple the monster in time.

So there you have it, try and use out your new skills in the MH Rise demo and get a hold of the new mounting system, quite literally.

The game is set to come out on March 26th, later this year. There are already rumors circulating of Nintendo's Switch Pro and an alleged release date.

Furthermore, it looks like the Nintendo Switch Pro could be much more powerful than anticipated. Another leak has shown that the Switch Pro display could be OLED.

It looks like Nintendo fans have a lot to look forward to this year. Stay tuned for more Monster Hunter Rise coverage. 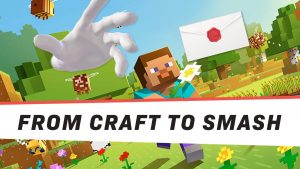 Minecraft's Steve in Smash Bros. Has Been in the Works for Years
5

After Nearly 5 Years, Pokemon Go Is Still A Huge Financial Success for Nintendo

Target Getting Another PS5 Restock This Week
4

Nintendo Breaks Silence on Switch Pro – What This Really Reveal…

Target Getting Another PS5 Restock This Week