The Call of Duty series is one of the very biggest in all of gaming and millions of fans always look forward to news about future installments. Luckily, today could have the biggest Call of Duty announcements in years!

Recently, a leaker claimed to know the Modern Warfare 2 reveal date, however, it looks like this could be sooner than expected.

In fact, not only do many in the Call of Duty community think that there will be an MW2 announcement today, but the highly-requested ‘Warzone 2’ could also be revealed today too!

Here’s what we know so far about these potential announcements.

Leakers have revealed plenty of the Modern Warfare 2 campaign and story details but the game hasn’t even been officially announced yet. For now at least.

Now, it looks like the reveal for both Modern Warfare 2 and a Warzone sequel could arrive today.

First, Modern Warfare developer Infinity Ward tweeted a gif, hinting that an announcement of some kind is coming.

Then, leakers within the Call of Duty community like @TheGhostOfHope shared that Infinity Ward could reveal the MW2 logo and confirm Warzone 2 later today.

This would most likely match the leaked Modern Warfare 2 title image that surfaced a few weeks ago.

A reveal at this time would make sense if Modern Warfare 2 releases earlier than usual, as leaks indicate. An earlier release would push the game’s marketing forward.

Additionally, whether these games are tied to the rumored Call of Duty subscription service, we will have to see.

Make sure to keep an eye out later today for an official announcement from Infinity Ward. If the developer reveals both Modern Warfare 2 and Warzone 2 today, it could be the biggest reveal in Call of Duty’s history!

Meanwhile, with fans missing ‘old Wazone’ with only Modern Warfare guns, the new Warzone could bring exactly what players want. Let’s hope for a more streamlined and simplified Warzone experience with the sequel.

Finally, Moder Warfare could take the series in a whole new direction. Leaks suggest that MW2 could get an ‘Attackers vs Defenders’ game mode like Rainbow Six Siege. 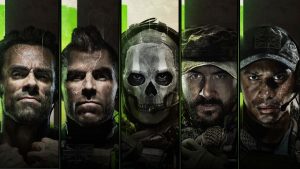