After multiple trailers, a brand-new name, and an official release date, The Legend of Zelda: Tears of the Kingdom is coming together. Here is everything we know about it.

After the immense success of Breath of the Wild, fans wanted to know what its prospective sequel would look like. Fortunately, at E3 2019, we were given a first look at the game formally known as BOTW2.

Now, after multiple teasers and trailers, we’re able to piece together some of the information to create a coherent whole. From story details and potential gameplay mechanics to a full-blown release date, there’s a lot going on in Tears of the Kingdom.

Tears Of The Kingdom Story Details

While a lot of the story details surrounding Tears of the Kingdom are fairly vague, we are able to glean a lot from the trailers we’ve seen so far. Here are the most noteworthy details we’ve gathered from the trailers.

We’ve seen a lot of footage of both Link and Zelda in Tears of the Kingdom. In fact, the first ever trailer for the game features them wandering through an ancient cave before being attacked by what appears to be Ganondorf (more on that later).

From what we’ve seen, this is everything we know about Link and Zelda in TOTK:

Of course, just from these details alone, it is hard to piece together a story. But it’s fair to assume that at some point Link becomes corrupted or affected by something, making his hand go black, tattoos appear on his shoulder, and potentially even breaking the Master Sword.

It is also possible that this happens at the same time Zelda falls into the black abyss – we see this in the 2021 E3 trailer. How big of a role Zelda will play is still unclear, as beyond appearing in the cave in the first trailer and falling in the second, she hasn’t had much of the spotlight.

Who Is The Undead Person?

In the very first trailer, we see an undead creature surrounded by the Malice from Breath of the Wild. Once again, it hasn’t been confirmed who this is, or indeed if they’re the villain.

However, the biggest theory is that this is Ganondorf. He’s not to be confused with Ganon, who was the primary antagonist of BOTW.

Ganondorf is the human form of Ganon and was the leader of Gerudo, a race of people who have appeared throughout the Legend of Zelda series. It is possible that the undead person seen in TOTK’s trailers, is in fact Ganondorf.

There are plenty of other theories surrounding this, such as the fact that Ganondorf may actually be the hero of BOTW2.

There is a lot of evidence pointing towards the fact that Tears of the Kingdom might include both time travel and a connection to the Legend of Zelda: Skyward Sword.

Of course, all of this is pure speculation. But there are grounds to believe that this isn’t all purely coincidental, after all, Nintendo ported Skyward Sword to the Nintendo Switch before any of the other games in the series.

We have also seen evidence that Link will have the ability to travel back in time, or at least manipulate objects to travel back in time. Whichever way you look at it, time is definitely going to be a big theme in Tears of the Kingdom and the connections to Skyward Sword cannot be overlooked.

Tears of the Kingdom Gameplay Details

Despite Tears of the Kingdom’s trailers being somewhat vague about its narrative, they have given us plenty of gameplay details. There is a lot to get excited about including the previously mentioned ability to manipulate time!

Link’s New Weapons & Abilities In Tears Of The Kingdom

From the various trailers, we’ve seen a number of unique abilities and weapons that Link uses. He can shoot fire out of his arm, manipulate objects to backward in time and even move through solid objects.

There are some other pieces of equipment in his arsenal including a giant rock bird that he glides around on. You may be able to wear a cape in Tears of the Kingdom, as we’ve seen Link wearing one in the key art.

Of course, you’ll still be able to glide around as you did in BOTW and fight an assortment of enemies. We’ve seen Moblins, a Stone Talus, and what appears to be a new Gecko-like golem.

Exploring Hyrule will definitely be a different experience in Tears of the Kingdom than it was in BOTW. For starters, Hyrule has been split into two distinct areas: the ground and the sky.

It seems like traversing the islands in the sky is going to be one of TOTK’s highlight features. We’ve seen Link dive from these and seamlessly fall towards the ground. This could imply that you can go between the two areas without a loading screen.

While ground exploration might be similiar to that seen in BOTW, the large craters and changes to Hyrule will almost certainly make it feel like a whole new location.

During the 2022 September Nintendo Direct, Nintendo announced the official release date for The Legend of Zelda: Tears of the Kingdom is May 12, 2023.

Tears of the Kingdom will release in .

It may seem like a long time to wait, especially if you are a huge fan of BOTW. In the meantime, you can live out your Zelda fantasies and play as Link in Multiversus.

Tears of the Kingdom - New Posts 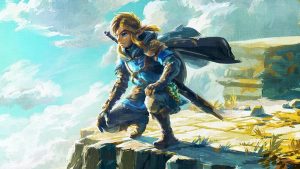