Here’s where to find a King’s Rock, the evolution item that will help turn Slowpoke into Slowking, in Pokemon Scarlet & Violet.

By now, a lot of trainers are coming to the end of their time in the Paldea region. And once you’re all done with the main story, it’s time to catch ’em all!

But some Pokemon aren’t that easy to come by in Gen 9, requiring specific items to evolve from weaker forms. One such Pokemon is Slowpoke, which requires a King’s Rock if players want to turn it into Slowking.

Here’s how to get your hands on the necessary evolution item:

How to Get a King’s Rock in Pokemon Scarlet & Violet

To get a King’s Rock, trainers will need to purchase the item from one of the Delibird Presents stores in Mesagoza. A King’s Rock costs ₽10,000 and will only be found in stores once players have acquired 4 Gym Badges in the Victory Road story path.

Here’s where to find the Delibird Presents store and pick up your rare item!

Alternatively, the King’s Rock can also appear at the Porto Marinada Market auctions, but only every few in-game days.

The auction items will change every 30 minutes so if you’d prefer to bid on the King’s Rock in the hopes of getting it cheaper, simply wait half an hour and check the stock once again. Alternatively, you may opt to change your Nintendo Switch’s internal clock and speed up the process.

What Does a King’s Rock Do in Pokemon Scarlet & Violet?

A King’s Rock is an item that can be held by a Pokemon in Scarlet & Violet. When the holder inflicts damage on an enemy, the target may flinch.

Primarily, a King’s Rock allows trainers to evolve Slowpoke into Slowking, by having the Pokemon hold the item and trading it to another player.

Although the King’s Rock is a decent option to help a Pokemon in battles, its main use tends to be evolving Slowpoke. After all, Slowking is a powerful Pokemon with excellent HP, Sp Atk, and Sp Def stats that can round out any team.

How to Evolve Slowpoke Into Slowking

To evolve Slowpoke into Slowking in Pokemon Scarlet & Violet, players will need to give the Pokemon a King’s Rock to hold, then trade it with another player.

Upon the trade’s completion, Slowpoke will evolve into Slowking. Then, simply get your Slowking traded back to you!

It does not matter what level a Slowpoke is traded; so long as it is holding a King’s Rock it will evolve.

Need help trading? Here’s a full guide to how trading works in Pokemon this time around!

To give Slowpoke the King’s Rock:

As a Water/Psychic-Type, Slowking has a 2x weakness to Electric, Grass, Bug, Ghost, and Dark-Type attacks. However, it only takes half damage from Fire, Water, Ice, Fighting, Psychic, and Steel moves.

It has a lot of strengths but almost as many weaknesses. Thankfully, the Pokemon boasts a hefty Special Defense stat, making it a great addition to your team despite its typing.

Why not learn how to boost your Shiny odds in Pokemon Scarlet & Violet to get your hands on a stylish dark pink Slowking?

Or check out where to find these other rare items: 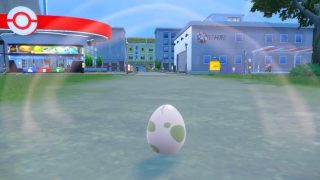