A trailer showcasing Ash Ketchum, a legendary Pokemon character, inside the world of Fortnite has gone viral on social media.

Over the last few years, Fortnite has become known for bringing characters from mainstream entertainment into the game.

Marvel, Star Wars, and multiple Anime shows have already joined the Fortnite universe, and now rumors of Pokémon joining that list have been circulating online.

But is there a collaboration in the works between Epic Games & Nintendo to bring these two worlds together?

Is Fortnite Getting a Pokemon Collab?

Unfortunately, Fortnite and Pokémon have no current plans to collab. The viral video going around on social media is a fan-made edit by an animator known as Feraalsy.

This cinematic trailer has been popping up around Twitter and TikTok featuring iconic Pokémon Trainer Ash Ketchum with his famous companion Pikachu accompanying him.

Charizard also features in the video as Ash releases him from a Poké Ball but while being an impressive animation it is only just a concept.

Will Fortnite Collab With Pokemon in the Future?

At the moment, it doesn’t look like Fortnite and Pokemon will cross paths anytime soon.

Epic Games and Nintendo have yet to collab on any crossovers. Although, in 2021, leaks suggested that Nintendo denied Epic Games the rights to a Metroid collab.

Nintendo is the creator of the Metroid franchise, which has been running since 1986 up until the present day.

If this is the case, Nintendo may have denied the rights to keep their franchises exclusively on their consoles and with Fortnite being cross-platform it would be impossible to achieve.

For now, we would suggest not getting your hopes up as it is not looking likely to happen at the moment.

And if you haven’t seen it, the Shockwave Hammer has been removed but it is returning in the next Fortnite update!

While one item has been removed, another has been added! Check out where to find and how to use the brand-new Guardian Shield in Fortnite! 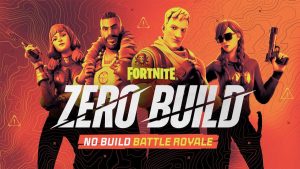