The Huntress is one of the many bosses players will encounter early on in God of War Ragnarok. However, she’s a formidable foe and can be challenging to beat.

Fortunately, we’ve compiled all the tips and tricks you’ll need to know in order to take her down and continue your journey in peace.

The easiest way to defeat The Huntress in God of War Ragnarok is to aim for her antlers which are her weak spot. If you hit them when they start glowing orange, you’ll stun her briefly, leaving her vulnerable to attack.

To hit these, you simply need to aim with either the Leviathan Axe or Blades of Chaos (although the axe is more accurate) and hold L2 to aim, and then press R2 to throw.

Outside of hitting her weak spot, you’ll simply have to be quick on your feet and dodge her unblockable attacks. It may be tough initially, but don’t forget you can activate your Spartan Rage to recover health.

By keeping up with her movements and striking while she recovers from her attacks, you will defeat her in no time.

However, if you hope to survive her flurry of attacks, you’ll need some tips and tricks. So keep reading for a detailed guide on how to beat her.

Best Strategy to Beat the Huntress in God of War Ragnarok

The Huntress uses a series of fast attacks, which you’ll need to avoid to stay alive. All of her arrow attacks deal fire damage, so if you’re not careful, you could burn to death.

Fortunately, these arrow attacks are telegraphed by a red circle appearing around her. You’ll also have plenty of time to dodge (double tap X) out of the way.

Here are some additional tips and tricks to help you defeat her:

It will also help to have some decent Skills already unlocked. You should know going into the fight what the best Skills to unlock early in God of War Ragnarok are. 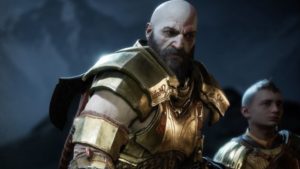