God of War Ragnarok will bring back some of the beloved Realms, as well as the rest of the Nine Realms previously unseen.

We got to see six of the Nine Realms in God of War 2018, but three were missing from Tyr’s Temple and The World Tree.

However, that changes with God of War Ragnarok, as all of the Nine Realms will be accessible to Kratos and Atreus.

What Are the 9 Realms in God of War Ragnarok?

There’s technically another Realm, called ‘The Realm Between Realms’ which is the in-between space between the Nine. We’re not including that on this list for the sake of clarity.

At the center of the realms is the Yggdrasil, better known as The World Tree. This is the central point of the Norse Realms, with each of the Nine Realms taking up a branch or root of Yggdrasil.

We’re going to explain each of these Nine Realms in as much detail as possible so you know what to expect in God of War Ragnarok.

It’s worth noting each of the Realms looks better on a next-gen console, so you might want to purchase the God of War Ragnarok PS5 bundle if you haven’t already got a PS5.

Realm of Humankind
Home to Kratos & Atreus
Present in God of War 2018?: Yes

Midgard is the standard Realm, acting as the middle point between all Nine Realms. This is where humans typically live. It’s the closest version of Earth in Norse mythology.

While it may be the simplest Realm by nature, much of the impending doom from Ragnarok and the war amongst Gods will mean that Midgard suffers the most.

At first glance, Alfheim seems like a more peaceful and beautiful Realm compared to Midgard. However, while you aren’t soaking in the scenery of the lake, you’ll see two races of Elves slaughtering each other.

In God of War 2018, Kratos and Atreus were stuck in the middle of a long-lasting war between the Dark Elves and Light Elves, with Dark Elves not taking a liking to the protagonists.

Helheim, better known simply as Hel, is the standard afterlife for most of the Norse inhabitants. Unlike Valhalla, where warriors who die honorably in battle go.

Helheim is more basic, except it’s very cold and you’ll find illusions of past regrets. It’s generally a Realm you want to avoid unless absolutely necessary for your quest.

Home of the Aesir Gods, such as Loki and Thor, Asgard is the centerpiece of Norse mythology. It’s also where Valhalla is, where warriors can live a life of luxury. That is at least until Ragnarok arrives. It’s believed that Ragnarok will see the Giants invade Asgard, and destroy it.

In God of War 2018, this Realm was inaccessible, as Odin hid it from anyone who wasn’t an Aesir God.

Featuring the tallest mountains of the Nine Realms, Jotunheim is better known as the home of the Giants. It’s a notoriously difficult Realm to reach, as it was blocked from The World Tree via Tyr’s Temple in God of War 2018.

When Kratos and Atreus finally arrived, the Realm was empty, alongside a wall depicting the life of Loki, who is said to avenge the Giants.

Realm of Vanir Gods
Home to Freya
Present in God of War 2018?: No

Not much is known about Vanaheim, which was also inaccessible during God of War 2018. We know it was the home of Freya, who was the ruler of the Vanir Gods. Unlike the Aesir Gods, the Vanir use various forms of magic instead of the Aesir’s brutal and elemental-based powers.

Access to Vanaheim is only allowed by Vanir Gods, meaning you’ll have to be very close to one of these to finally see this Realm.

In God of War 2018, Niflheim was mainly seen via Ivaldi’s Workshop. This Realm is covered mostly in toxic smoke, that slowly drains the life of anyone who enters its air.

However, the toxic fog isn’t the most dangerous thing in Niflheim, as anyone who enters the Dwarven maze within Niflheim will come face-to-face with a variety of creatures and monsters.

Covered in lava, volcanos, and primordial fire, Muspelheim is a fiery hot, and challenging place to end up. During God of War 2018, Muspelheim is home to a variety of challenges, all leading up to a difficult fight with a Valkyrie.

This Realm is home to Surtr, the original Fire Giant, who has been presumed missing for an extremely long time. However, he is said to wake from a deep slumber during Ragnarok and lead the other Fire Giants into a battle with the gods.

Better known as the home of the Dwarves, Svartalfheim was also inaccessible during God of War 2018. We know that the Dwarves hold some closely-kept information within the Realm, and only their kind can enter the Realm.

While it’s unclear how Kratos and Atreus will find themselves within this part of The World Tree, we can assume that it will be thanks to their Dwarven friends Brok and Sindri.

Those are all of the Nine Realms you’ll be visiting in Ragnarok, but make sure you have the right difficulty settings for God of War Ragnarok so you can handle the more dangerous places. 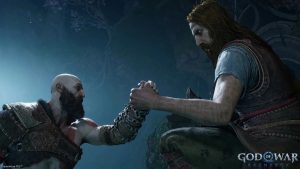