A new leak for God of War Ragnarok has possibly revealed the design of the long-awaited Odin.

Since God of War 2018 was released, many players have been waiting to meet Odin, the All-Father who we suspect won’t like Kratos.

And despite some trailers, we have yet to see Odin and how he looks in the God of War universe. However, it seems a recent leak may have revealed his Ragnarok design.

What Does Odin Look Like in God of War Ragnarok?

If the concept art is correct, Odin appears to resemble Tyr with a similar beard, but with a glowing orange eye, pale skin, and what looks like a blue cloak.

It was shared by user u/AestheticGamer on the r/GamingLeaksandRumours subreddit, a community known for sharing any and all gaming leaks.

Before we go any further, it is worth noting that concept arts are just concepts, as the name implies, and the design can change drastically between original design and launch.

Unfortunately, we can’t share the leaked image in case PlayStation strikes us. But you can find a tweet including the image below:

One user shares the fact they think Odin resembles Baldur, one of the main antagonists of God of War 2018. Another user believes they look like Tyr, who was revealed in the first official trailer for God of War Ragnarok.

The art director for God of War Ragnarok, Raf Grasseti, previously said that Odin was the hardest character to design on an Instagram story.

The leaker has also said that they’re holding on to “a bunch of other God of War Ragnarok things”. And they are waiting for a trailer before leaking more.

Finally, the leaker also said they would be sharing an unlisted video for God of War Ragnarok as a “proof of claim”, but that video is yet to surface.

Of course, we can’t say whether or not this leak is real. We’d recommend taking it with a pinch of salt. However, for those unaware, AestheticGamer was also the source behind the Silent Hill concept art leaks a few months ago. These were promptly copyright struck by Konami.

If the leak is exciting you for one of 2022’s biggest releases, find out which edition of God of War Ragnarok you should pre-order.

All Berserker Graves Locations & Rewards in God of War Ragnarok 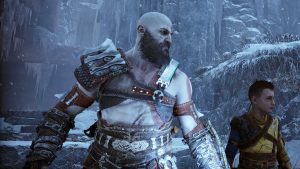