The conclusion of God of War’s Norse Saga is here with Ragnarok – here’s the ending explained, as well as how to unlock the secret ending.

After God of War 2018’s explosive ending, which set up the latest game’s story, we know how the finale of the Norse Saga goes down.

Many players are wondering whether their favorite characters survive, especially Kratos. Fortunately, we have all of the answers here for you.

We will cover major story points, including the ending, for God of War Ragnarok here. If you don't want to spoil the experience here, please go back!

Does Kratos Die in God of War Ragnarok?

No, Kratos doesn’t die in God of War Ragnarok. Despite previous prophecies and plenty of hints towards his death, the Greek God of War survives another mythology.

Throughout the game, it is believed that a prophecy from God of War 2018 will come true, and Kratos will meet his demise. This is not the case, as it turns out a real prophecy was hidden away from them.

Who Dies in God of War Ragnarok?

Excluding any minor characters in the game, here’s everyone who dies in the latest God of War game:

Brok, Surtr, and Freyr are the only casualties on Kratos’ side, while the rest were on Asgard’s side. However, Thor had a change of heart before his death.

While many players were speculating that Kratos, Freya, or Atreus would die in this game, all of them come out alive in the end.

God of War Ragnarok ends with Kratos, Atreus, and Freya defeating Odin. Asgard is the only Realm to be destroyed.

However, we also find out that Faye, Kratos’ wife who dies before the events of the 2018 game, hid away the real prophecy of Kratos and Atreus.

The Giants predicted that Kratos would perish, which is the mural we saw at the end of the previous game. It’s revealed that Faye created a different fate, believing the duo could change their destiny.

It seems the original prediction was based on their previous actions, a belief that characters would be stuck in their ways. Kratos sparing Thor, instead of killing him like he would have if he was his older self, seems to have put them on the surviving path.

After this, Kratos finds another board, which predicts that he will finally receive love and admiration from mortals. He and Freya set off to repair and solve the problems remaining in the eight Realms.

The ending is definitely heart-warming, and a real tear-jerker. However, we wonder what will happen in the future, or is God of War Ragnarok the last game in the series?

How to Unlock the Secret Ending in God of War Ragnarok

Players must take part in the “A Viking’s Funeral” Favor from Lunda to see the secret ending, which sees Kratos, Freya, Mimir, and Sindri saying goodbye to Brok.

The side quest takes place in Svartalfheim, Realm of the Dwarves. You need to speak to Lunda in any of the shops to receive this favor.

You’ll first need to go to the Nidvellir Mystic Gateway to find Brok’s body and let his close friends know you’re attending. After, you can head to the Aurvangar Wetlands Mystic Gateway to take part in the funeral.

What Is the Secret Ending in God of War Ragnarok?

Kratos, Freya, and Mimir head to Svartalfheim to take part in a Viking Funeral for Brok in the hidden ending of the game.

It’s a touching moment, with not much in the way of dialogue. As the boat with Brok’s body sets ablaze, Kratos attempts to speak to Sindri. However, Sindri still holds Kratos and Atreus to blame.

It’s unclear whether or not Sindri will return in the future to cause issues for Kratos and his friends. The Dwarven blacksmith could be an interesting antagonist, with his realm hopping and ingenuity being a great counter to Kratos’ brute strength.

Is Tyr Alive in God of War Ragnarok?

While Odin may have been pretending to be Tyr and learn of the gang’s plans, the real Tyr is actually still alive.

He can be found in a prison in Niflheim, just on the left path as you head towards the Tree of Ravens. He was kept in a prison cell so Odin could pretend to be him if the time was necessary.

Upon first meeting Tyr, he tells you that Odin will have known about the commotion caused when defeating the prison’s guards. However, Kratos and Freya quickly tell him that Odin is dead and Asgard has fallen.

Tyr needs time to reflect on this, and he leaves to do so. That being said, he says the name Kratos is familiar and believes he knows this from somewhere.

Tyr has access to the Unity Stone, which is said to allow him inter-dimensional travel to different cultures, possibly hinting that he heard of Kratos when he went to Greek mythology.

While the latest journey for Kratos may be over, find out if God of War Ragnarok has a New Game + to see if you can relive it with your new gear! 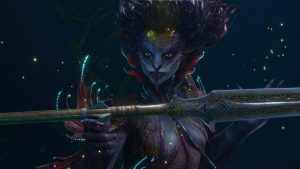 How to Get Draupnir Spear in God of War Ragnarok 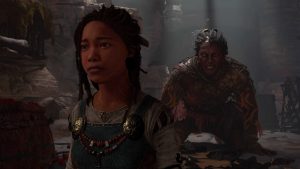