PlayStation Plus fans are in for a treat in January 2023, with 3 must-play games in the PS Plus free offerings.

There’s starting the new year off right, and there’s ‘getting Star Wars for free’ starting your year off right. It seems that Sony is wanting to kick things off with a bang in 2023, with some incredible games on offer to PS Plus subscribers.

Anyone signed up to even PlayStation Plus’ lowest tier ‘Essential’ will get their hands on 3 free games in January 2023. And they’re yours to keep, so long as you remain subscribed to the platform.

As usual, Dealabs was successfully able to leak the PS Plus freebies (something it continues to predict with each passing month), and it’s a big one for Star Wars fans.

Confirmed by PlayStation, the free PS Plus games coming to the Essential tier in January 2023 are:

This might be our best set of freebies in some time, and all are available to download now!

December’s offering went live on December 6, so we expect we won’t be waiting long before these new titles become available.

Here’s a quick breakdown of all 3 games that will be available to download for free very soon:

Easily the most exciting PS+ game in some time, Jedi: Fallen Order follows Cal Kestis, one of the few remaining Jedi in the years following Order 66.

Not only is Fallen Order one of the best Star Wars experiences in recent history, the singleplayer action-adventure title has a sequel dropping in early 2023.

Plus, don’t forget to view your PlayStation Wrap-Up to see how you spent 2022!

Although Fallout 76 had a disastrous launch, don’t let the initial reception fool you. Now 4 years on from release, the online post-apocalyptic RPG has seen tremendous growth and vast improvements.

In Fallout 76, players can finally explore an open world ravaged by nuclear war together with other players. And although that initially meant Fallout 76 was an empty world devoid of NPCs, after years of support, it’s finally turned into an experience far more similar to Fallout’s beloved single-player entries.

It’s well worth a try, and it’s certainly hard to argue with getting it for free.

Axiom Verge 2 may be the sequel to Axiom Verge, but it requires no prior knowledge of the original Metroidvania title. This side-scroller action adventure follows Indra Chaudhari, a billionaire who receives a mysterious message that sends her to Antarctica to find her missing daughter.

The only indie title to hit PS Plus this month, Axiom Verge 2 is well-worth a look, particularly for fans of platformers with some excellent exploration.

It’s an exciting time to be a PlayStation fan, with the PS VR 2 also dropping in 2023! If you’re picking up the new hardware, don’t forget to pre-order here, or check out the list of all upcoming PS VR 2 games!

How to Set Up & Use Discord on PS5 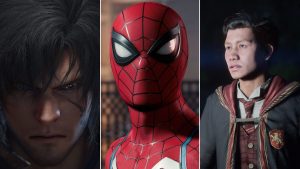