If you missed a Battle Pass or two over the years, here’s a list of all Fortnite Tier 100 skins you will no longer be able to get your hands on!

Fortnite Battle Royale doesn’t get enough credit for launching the Battle Royale genre into the stratosphere. But what the game also popularized was the Battle Pass, a feature that tends to be a mixed bag in gaming these days.

That said, Fortnite has always been the gold standard for Battle Passes, doing them better than almost every other game out there. In terms of value and high-quality unlocks, Fortnite Battle Passes have both in spades.

Complete a Battle Pass and you’ll even unlock a coveted Tier 100 skin, showing how hard you dominated that Fortnite season. And once the season is over, the opportunity to get your hands on the skin is gone forever.

Here’s a full list of every Fortnite Tier 100 Battle Pass skin from every season in Chapters 1-4:

Here are all 22 Fortnite skins that players could unlock by reaching the end of their respective season’s Battle Pass:

Note: Fortnite Season 1 did not have a Battle Pass, therefore it had no Tier 100 skin to unlock.

Check out a full breakdown of all the Fortnite Tier 100 skins below:

One of the most prestigious skins in Fortnite history, the Black Knight was the final skin for Fortnite’s first-ever Battle Pass, back in Season 2.

Though you only needed to grind through 70 tiers to unlock the outfit, Black Knight is a status symbol as it shows you’ve been a true fan since the early days. And while it’s not technically a ‘Tier 100’ skin, it deserves mentioning on this list.

Although Season 3 had a space exploration theme, the first-ever Tier 100 Battle Pass unlock was The Reaper. Known to the Fortnite community as ‘John Wick’, this skin could be seen as Fortnite’s first major collaboration.

That said, the resemblance is entirely unofficial and a true John Wick skin would later drop in Season 9. If you see someone in your game with The Reaper skin, you’d do well to not to engage them to avoid a quick trip back to the lobby.

The first customizable Tier 100 skin, Omega is a super-villain who broke free from prison in Season 4. Upon unlocking him at Tier 100 of the Fortnite Season 4 Battle Pass, players could then unlock new customization options for their outfit.

With a passing resemblance to Genji from Overwatch, Omega could equip a silver mask, new shoulder and elbow armor, and even one of four color schemes.

After the first-ever Fortnite live event ‘Blast Off’, new POIs began to emerge through cracks in reality. One of the new major areas was Viking Village, which could explain Ragnarok’s presence in the Season 5 Battle Pass.

By unlocking Ragnarok and completing his challenges, players could equip new armor for the viking, including a spectacular beard as well as a new menacing skull helmet.

Fortnite Season 6 ‘Darkness Rises’ had a Halloween theme, and Dire was the sinister Tier 100 unlock. By completing the character’s challenges, players could unlock a whopping 5 different styles, and 4 different clothing color variations for the outfit.

Once unlocked, Dire could be used in Human, Half-Wolf, or Werewolf forms, depending on your inclination.

Fortnite’s first Winter-themed season dropped in Season 7. With much of the island turned to ice, players watched as a giant castle and The Ice King himself emerged from the frozen wasteland.

The Ice King could also be unlocked at Tier 100 of the Season 7 Battle Pass, allowing players to take on the reigns of the season’s villain. And by outliving opponents, Fortnite fans could get their hands on red, silver, and gold variants of the iconic skin.

In the pirate and adventure-themed Fortnite Season 8, Luxe was the Tier 100 Battle Pass outfit. The first-ever female Tier 100 skin, Luxe is a stylish unlock that looks best in gold.

However, to unlock her golden variant, players needed to outlast a whopping 25,000 opponents. Before that, red, white, and black variants were all up for grabs.

Part of the Suit Up set, Vendetta does just that with 5 stages of an outfit to unlock. Although the skin may look unassuming at first, suiting up to its fullest gives Vendetta an outfit that resembles an Exo in Destiny.

Not only were new armor pieces available to unlock, but Vendetta also has several different color schemes available to those who could prove their worth in-game.

Season X was the tenth and final season of Chapter 1, and Ultima Knight was the ultimate reward for players to unlock. With his Origin form reminiscent of the Black Knight, players could give the iconic Battle Pass icon an upgrade in Season X.

Ultima Knight was the first remixed skin to appear as a Tier 100 reward, and it was an excellent tribute to Fortnite’s first Battle Pass to close out the Chapter.

After Fortnite’s premiere Chapter came to a conclusion, we were greeted with a new map, new gameplay elements, and a new Battle Pass. The first Tier 100 skin to be introduced was Fusion, a mysterious figure that seemed to leak energy similar to that of the Zero Point.

Interestingly, Fusion’s two alternate styles (Vex and Xev) suggest that the two characters fuse together to form this Tier 100 outfit.

Given that Chapter 2 Season 1 was the longest season to date and Fortnite’s new island brought a lot of attention to the game, it’s possible that this could be the most common Tier 100 skin out there.

The leader of GHOST, a new spy and military organization making its debut in Chapter 2, Midas was the Tier 100 Battle Pass unlock in Season 2. When picking up a weapon or entering many vehicles, Midas’ touch will turn it to gold for the rest of the match, even when the player is no longer touching it.

Midas has two Faction Styles, for GHOST and SHADOW, each one giving him a new suit and fully golden skin.

Later, Midsummer Midas and Marigold skins would become available for all players to purchase, meaning the golden touch isn’t locked behind this iconic Battle Pass outfit.

The second female Tier 100 skin behind Luxe, Eternal Knight is the counterpart to Ultima Knight but with so much more style.

This Legendary outfit had a default, black, gold, and Super Level variation, depending on how determined a player was to unlock everything the season had to offer. And, including every stage of her Super Level variation, there are a total of 183 possible combinations for players to use once they’ve unlocked them.

At Tier 100 of Chapter 2 Season 3, players also unlocked the Masked version of Fade, Season 3’s Tier 1 skin. And it’s possible that it may have overshadowed Eternal Knight a bit.

Chapter 2 Season 4 of Fortnite what themed after the Marvel Nexus War, and featured Marvel superheroes heavily. As such, it wasn’t surprising to see Tony Stark (AKA Iron Man) as the season’s Tier 100 skin.

Tony Stark himself could be obtained at Tier 93 of the Season 4 Battle Pass. However, by attaining Tier 100 and completing Tony Stark Awakening Challenges, players could unlock an emote which had the superhero suit up into his iconic Iron Man armor.

This was the first time that a Tier 100 outfit would be a collaboration, though it was far from the last.

Hot on the heels of the first-ever Tier 100 collab came Season 5, a hunt-themed season. This time around, Star Wars’ Mandalorian was actually the Tier 1 skin that players could unlock.

However, over the course of the Battle Pass, Fortnite users could get access to new Beskar quests, eventually allowing them to fully suit up Din Djarin.

What’s more, The Child (AKA Baby Yoda / Grogu) was obtained as a Pet at Tier 100, allowing Mando to be accompanied by the beloved Star Wars character.

In Chapter 2 Season 6, Fortnite’s Zero Point wiped out all technology from many parts of the island. However, a number of strange towers known as Spires began to surface, bringing about a new threat.

The Spire Assassin would guard these locations as a Boss character, but it was also obtainable at Tier 100 of the Battle Pass. Alongside the outfit, players unlocked a built-in emote ‘Tower Guard’ that unmasks the Spire Assassin mid-game.

Chapter 2 Season 7 of Fortnite Battle Royale was alien-themed, and who better to deal with alien invaders than Rick Sanchez? The Rick and Morty character was the season’s Tier 100 Battle Pass unlock, attainable by purchasing all cosmetics of Page 10 of the pass.

Rick Sanchez became the first cartoon character to enter Fortnite, and came alongside an extra style: ‘Toxic Rick’. Although several other Rick and Morty characters have since appeared in the Item Shop, there will never be another way to get your hands on Rick Sanchez himself.

Carnage may be an extremely cool skin, but it’s hard to argue when fans point out that the Marvel-inspired skin has little to do with the season itself. At least we can argue that the season took place in the aftermath of an alien invasion, while corruption spread throughout the island.

Also at the end of the Season 8 Battle Pass, players could unlock the Carnage Cleaver, a unique Pickaxe that’s only able to be wielded by the Symbiote.

Read More: Every Peely Skin in Fortnite & How to Get Them All

Kicking off Chapter 3 comes a new and exciting season, complete with one of the most popular superheroes of all time. Spider-Man arrived at long last in Chapter 3 Season 1 and while his regular suit was attainable on Page 9, another variant was waiting at the end of the Battle Pass.

The Symbiote Suit appearance swaps the iconic red and blue for black and white as Peter Parker utilizes the same Symbiote that would eventually become Venom.

As part of the season’s bonus rewards, players could also get their hands on the Future Foundation suit, as well as three recolors of the original getup.

Another Battle Pass Tier 100 skin that had little to do with the main season was Doctor Strange. This Marvel-inspired skin didn’t quite fit into the season’s resistance theme, but it’s a stylish outfit nonetheless.

Despite Chapter 3 Season 3 having a “Vibin'” party theme, Star Wars content also returned to the island this season. Lightsabers made a welcome comeback, and Darth Vader would drop into each match as a powerful Boss.

Having made his debut in the Collision event prior to the season’s beginning, the Sith Lord was an eagerly-awaited addition, even if he didn’t quite fit the ongoing theme.

Spider-Gwen, in a heavily Spiderverse-themed appearance, made her debut in Chapter 3 Season 4, again not quite matching the season’s style. Although Gwen, like Paradigm and The Herald, did come from another universe this season, she didn’t have anything to do with the plot.

And although Gwen Stacy was a very welcome addition, she was just one of the reasons why fans hated the Fortnite Season 4 Battle Pass.

The Ageless also appears at his castle The Citadel in Chapter 4, appearing as a Boss. He is the first non-collaboration Tier 100 outfit since Spire Assassin in Chapter 2 Season 6, a whopping 7 seasons ago.

We’ll continue to update this article as more Tier 100 skins debut, so check back soon to see what you’ve missed!

Looking for more Fortnite guides? Here’s how to get a Victory Royale every time in Fortnite Battle Royale! 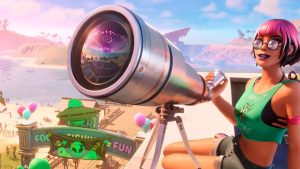