According to a new leak, Marvel outfits could be coming back to Fortnite, with Black Panther, Captain Marvel, and more heroes up for grabs.

Fortnite is known for its legendary collabs, but none seem more popular than its Marvel skins. In fact, Disney and Epic Games seem so friendly that the battle royale once had an entire season that was Marvel-themed.

Since then, the Marvel and Fortnite crossover comic Zero War has seen great success, and countless more superhero skins have appeared in the Item Shop.

But could earth’s mightiest heroes be returning sooner than expected?

A new leak from Fortnite news account imentoyt, the Marvel Royalty & Warriors Pack is returning on August 6. If the leak is correct, the bundle will go live at 5 PM PT / 8 PM ET / 1 AM BST (August 7).

The store bundle will allegedly be present in Fortnite for a week, leaving the store on the evening of August 13.

UPDATE: The Marvel Royalty & Warriors Pack is available in Fortnite now, alongside a huge amount of returning Marvel cosmetics!

Are Marvel Skins Coming Back to Fortnite?

This new leak could mean that all Marvel skins (minus the ones that were Battle Pass-exclusive) could return to Fortnite today! After all, it would be strange to see the Marvel bundle reappear by itself.

It’s worth noting that you can already get a new Wolverine Zero skin in Fortnite right now. It makes sense that Marvel could be in for a resurgence, but the leak is still worth taking with a pinch of salt.

That said we did just get most of the DC skins appearing in the Fortnite Item Shop once again. Perhaps it’s time to bring back more iconic heroes to the battle royale.

But you might want to save those V-Bucks, as we’re only a few days away from the leaked Dragon Ball x Fortnite collaboration!

Fortnite: New Rocket League Cosmetics & How to Unlock Them
3

Fortnite: How to Easily Destroy Structures With a Baller
4 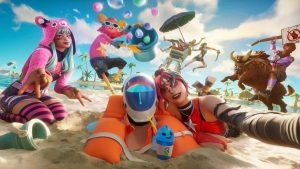 Fortnite: New Rocket League Cosmetics & How to Unlock Them…

Fortnite: How to Easily Destroy Structures With a Baller…
Recommended