Players are reporting that this Week 2 challenge for Fortnite involving headshots with the Two-Shot Shotgun isn’t tracking properly.

If you’re having issues getting headshots with the Two-Shot Shotgun in Fortnite, you’re not the only one. Now that the Week 2 challenges are here, players are trying to blast through each one for some additional XP.

After all, XP is so low in-game right now that some Fortnite players believe Epic is pushing them to buy Battle Pass tiers!

And, as if it wasn’t already hard enough to level up, now one of the Week 2 challenges isn’t tracking properly.

Fortnite: How to Fix Headshot Opponents With Two-Shot Shotgun Not Tracking Bug

If you’re experiencing the bug that’s causing the Two-Shot Shotgun challenge to not track correctly, there’s a fix.

Reportedly, the challenge is only sometimes tracking headshots, which is making the task hard to complete. It is believed that this issue could be to do with not all pellets striking the enemy player in the head, so getting up-close to your target could resolve matters.

However, a simple solution to the issue is to go hunting. Grab your newly-buffed Two-Shot Shotgun and find some wolves.

For some reason, perhaps because wolves aggro on the player, they count as opponents for this quest. Get them to chase you down and headshot them right before they pounce.

Read More: Fortnite: How to Get Among Us Bundle With Crewmate Back Bling

Of course, this might still fail to track on occasion. But it’s a lot easier to get a free shot at a wolf than it is another player – particularly as the Two-Shot Shotgun is extremely hard to use.

Meanwhile, there’s a new trick to get free Mythic weapons in Fortnite Season 3! Get yourself a Mythic SMG and you’re set for this season’s meta.

And today, the 5 Trillion HP rock pile has finally broken in Fortnite! Why not go check out what the new secret cave has to offer? 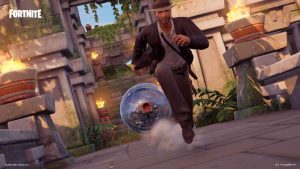