It’s time for the FIFA 23 TOTW 12 predictions. This 23-man squad will feature the best performers from the latest weekend fixtures.

The Argentine was tested multiple times throughout his match, with his side going down to ten men in the first half. The ‘keeper made seven saves and received the highest match rating as he kept a clean sheet.

The French wingback picked up two assists and received the highest match rating as PSG secured an important three points.

The Brazilian was rock solid at the heart of his side’s defense. With a goal, a clean sheet, and the highest match rating, we’d be confident of his inclusion in the squad.

The German scored an 82nd-minute winner as Burnley continued their goal to return to England’s top flight. With the new TOTW upgrade system, Beyer could be a quality item.

The Polish defender scored the only goal of the game whilst also keeping a clean sheet. Lens are keeping the pace on PSG but can they win an unlikely Ligue 1 title?

The Turkish midfielder has been unlucky not to receive a TOTW item in FIFA 23. With a goal and the highest match rating, this could be the week he finally features.

The free-kick maestro himself scored yet another against Everton. Ward-Prowse’s double at Goodison secured an all-important three points in this Premier League relegation battle fixture.

It’s hard to believe that Rashford has yet to get a TOTW item in FIFA 23. The English forward was the talk of the weekend after a controversial offside decision but with one goal in a derby fixture, it could be enough to warrant a place in the squad.

The Frenchman only recently received a FUT Centurions item in Team 1, but with a hat trick, it will be hard to ignore him for TOTW 12.

The Canadian struck twice as his side got a comfortable win. Mohamed Bayo also scored twice, but we have gone with David as he got a higher match rating and is overall a better FIFA 23 item.

It’s been a long time coming, but Kvaradona may finally get a special item in FIFA 23. Victor Osimhen is also a likely contender with 2 goals and an assist, but we feel that the Georgian would be a more interesting inclusion, especially if he receives the featured TOTW boost as well!

It feels wrong to have Ramsdale on the bench, but he was immense as the Gunners continue their fine form. The Englishman helped deny their North London rivals from scoring with some excellent stops.

The Frenchman was not the first choice in this game, as Juan Mata scored twice. However, the Spaniard is currently not on FIFA, and the right-back had the second-highest match rating.

The OGC Nice midfielder is one of football’s hottest prospects, and it’s clear why. With 1 goal and 1 assist, he is in with a shout to feature in FIFA 23 TOTW 12.

There have been quite a lot of goals scored this weekend, and Lookman got in on the action in a huge 8-2 win. The English forward scored twice, assisted once, and received the highest match rating.

Another massive fixture at the bottom of the Premier League, and Johnson was vital in winning the game for his side. This was a toss-up choice between Gibbs-White, who assisted twice, and the Welshman. However, we went for Johnson as he makes for the more interesting inform!

The Pukki party has arrived! It perhaps hasn’t been the season they hoped for, but Pukki’s three contributions were massive in the race for the play-off spots in the EFL Championship.

The Italian forward struck twice as Monza secured a 3-2 win.

The Turkish ‘keeper made a total of 10 saves! His heroics between the sticks gave his team all three points.

The Maltese midfielder had a hand in both his sides goal. Coupled with a high match rating, he has an outside shot at TOTW 12.

The Portuguese midfielder assisted twice as his side went on to win. Bruno Wilson could also be in with a shout for FIFA 23 TOTW 12; however, we have gone for Samu in our prediction.

The Frenchman is one of the most obvious shouts this week. The central midfielder had an almost perfect match rating in his side’s 4-1 win.

A hat trick for Cornette should cement his place in the TOTW squad.

It certainly looks like a strong TOTW coming to FIFA 23. However, there will be even higher rated cards coming to the game very soon!

And in case you missed it, here is the current FIFA 23 TOTW 11 squad featuring players like Harry Kane! 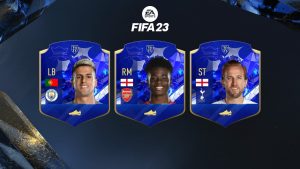