EA Sports’ next football game, EA Sports FC, is set to use the Frostbite engine similar to their previous FIFA video games, according to leaks.

FIFA 17 was the first FIFA game to use the Frostbite engine, promising new and innovative changes to the football game series.

Since its introduction, the FIFA franchise has improved its technology, including the most recent addition of Hypermotion Technology.

Despite the name change, EA Sports FC will be similar to the FIFA games, and it looks like the game will use the same engine as well.

Leaks Suggest EA Sports FC Will Use The Frostbite Engine

According to the reliable FUTZone, EA Sports FC will continue to use the same Frostbite engine as previous FIFA games.

This is big news for FIFA players as the Frostbite engine has let the developers bring in new and exciting features to the franchise over the past 7 years.

It also came with game-changing features such as the inclusion of acceleRATE types in FIFA 23.

These new leaks indicate that EA Sports FC will continue to develop its Hypermotion Technology. Allowing them to deliver even more game-changing additions to their upcoming football game.

What Is The Frostbite Engine?

The Frostbite engine is an Electronic Arts-exclusive tech platform. This engine was created by DICE and was first used in 2008 for Battlefield: Bad Company.

The majority of EA Sports video games franchises currently use the Frostbite engine, including:

Other games include Battlefield, Need for Speed, and the upcoming remake of Dead Space.

EA Sports have already announced that the end of their partnership with FIFA won’t affect their licenses for players, teams, and leagues in the official EA Sports FC announcement.

However, this could mean we won’t have fun and exciting content, such as the new Argentinian World Cup dynamic images in FIFA 23 happening in the future! 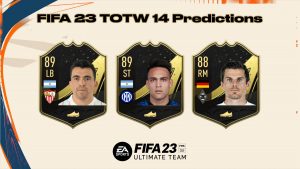