There’s a new Pokemon Scarlet & Violet glitch that allows you to duplicate items and sell them for a huge profit!

If you’re looking to get more of a particular rare item in a hurry, or just find a way to earn money fast, we’ve got you covered.

This new duplication glitch will allow you to clone any item that can be given to a Pokemon to hold. It can also be used to get you a horde of valuable items, making it the fastest way to earn money in Scarlet & Violet.

Be warned, this is an endgame glitch! If you’re not in the postgame yet, why not get the Amulet Coin in Scarlet & Violet to boost your income instead?

Here’s how the new trick is performed:

How To Duplicate Items in Pokemon Scarlet & Violet

To duplicate items in Pokemon Scarlet or Violet, you’ll need to first beat the game to unlock Koraidon/Miraidon’s Battle Form. Then give them the item you want to duplicate.

You need to then hit ‘+’ to ride your legendary mount before once again setting them to Battle Form. Catching new Pokemon will then allow you to duplicate its held item.

Here’s a full breakdown of how the duplication glitch works and how to perform it:

Then press ‘+’ to ride your legendary Pokemon and get off it once more. Change Koraidon/Miraidon to Battle Form, sending the newly-caught Pokemon to your Boxes, and you’re free to duplicate once again!

For a video explanation of this process, check out the following guide by YouTuber BLAINES:

The fastest way to earn money in Pokemon Scarlet & Violet is by using the duplication glitch above on an incredibly valuable item like the Ability Patch which can be sold for ₽125,000 each.

Players can duplicate the Ability Patch 8 times using the steps above, and then sell them at a Poke Mart for ₽1 million in 5 minutes!

Here’s how to get your first Ability Patch to start the whole process!

It’s a complex trick but one that we highly recommend you taking advantage of before it’s too late. After all, The Pokemon Company could choose to patch this glitch in the future if it catches wind of too many players using it. 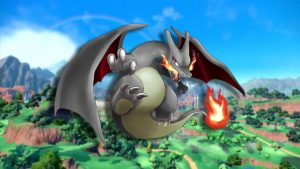