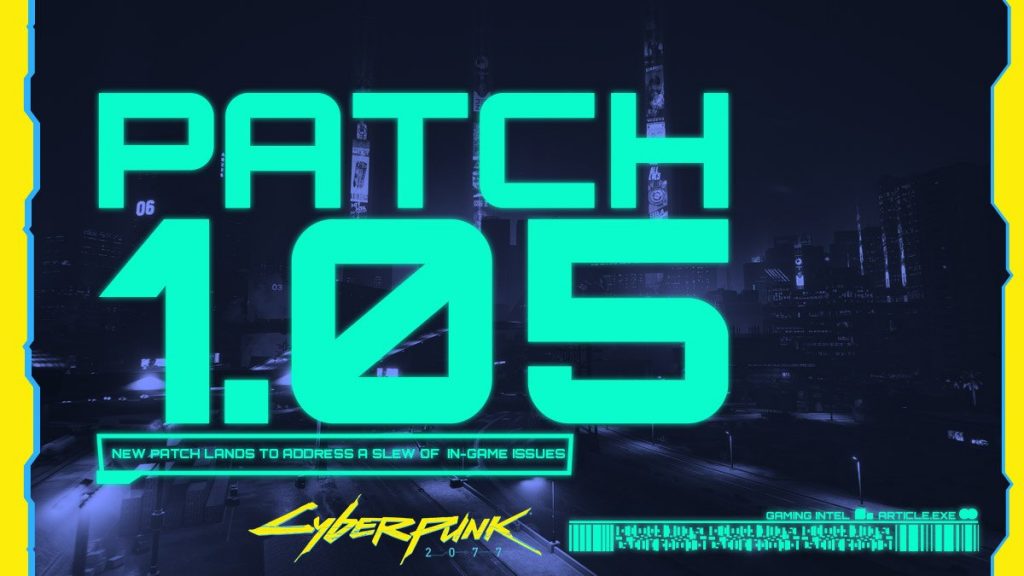 The patch promises improved stability, which has been a significant issue for console users since launch.

The issue has been so severe that Cyberpunk 2077 has been pulled from the Playstation Store and Sony has recently provided a refund update.

The game will continue to be supported despite being removed from the store for the time being.

Furthermore, players who are unhappy with the game can request a full refund if need be.

Cyberpunk 2077's latest patch is rather large, currently 17.5GB on the Playstation 4.

The game's troublesome launch has made people question whether or not fixing the game can still be successful. However, this patch should help to alleviate console players' suffering somewhat

Some notable changes included in Patch 1.05 include bug fixes for certain quests.

There were a number of issues that could prevent players from progressing in certain missions.

In particular, there were many issues with character dialogue and the in-game messaging system. Other problems involved certain NPCs harassing the player over the phone, which has now been addressed.

Although perhaps not game-breaking bugs by any means, in a game that promises an immersive experience, it's very easy to be pulled out of the world of Night City when these bugs happen.

Players should hopefully notice that quests are a lot more stable, work more effectively, and won't distract the player as much.

Cyberpunk 2077's latest patch promises to also fix a number of AI issues, this has been another key problem since the game's release.

Patch 1.05 apparently improves "the reaction times of NPC's taking cover." This is good to see see as many NPC's in Cyberpunk 2077 can behave in rather unusual and non-human like ways.

Other gameplay improvements include "correcting the number of shots needed to kill civilians from a distance whilst in combat".

This might be a bit redundant if you have opted for a melee build, however. If you're curious about how to make the best melee build in Cyberpunk 2077, you can read our guide here.

Some visual fixes for Cyberpunk 2077 include a rather strange issue where Delamain, the AI chauffeur service, would appear displayed over the top of the current caller.

A rather hilarious visual fix that has also been addressed. As CD Projekt describes, "V appears more modest in the inventory preview."

This is in reference to a bug where the player character's genitalia could be seen 'poking' through items of clothing. It happens to the best of us...

Other visual fixes include some UI overlapping issues that CD Projekt is now addressing. HDR support has also received a small update, as the developers describe they have "added some warmth".

Some minor but distracting UI issues also now have a fix. Weapon crosshairs should no longer persist on-screen, as one example.

Furthermore, issues with accessing fast travel terminals and problems with utilizing the quest journal have been changed.

There are a number of other important changes in Cyberpunk 2077's latest patch.

As CD Projekt describes, there are "multiple stability improvements, including crash fixes." This is the most important change in patch 1.05 as this is the overriding issue with the game, especially on consoles right now.

Other console specific changes are as follows:

Hopefully, patch 1.05 should alleviate some of the glaring issues Cyberpunk 2077 is currently facing.

If, however, you are blocking out the hate and still finding you're having a good time with the game, you might want to check out some of Cyberpunk 2077 easter eggs we've found so far.

I find this game really boring. I'm regretful that I bought it. It should have been a $15 game.

Cyberpunk 2077 Has Received Positive Reviews – But Has Major Problems
4

Cyberpunk 2077: Which Life Path Is Best For Your Character?
5

Cyberpunk 2077: What Time Will I Be Able To Preload The Game?…