Cyberpunk 2077: Easter Eggs We Know About So Far 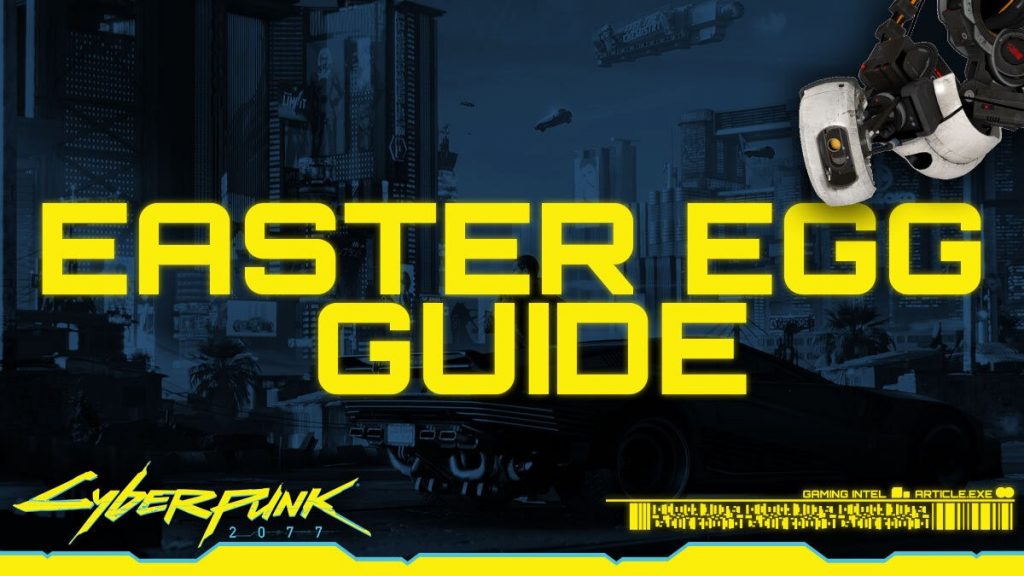 Cyberpunk 2077 is filled with an abundance of easter eggs just waiting to be discovered. But have you managed to spot the more subtle ones too?

If you've been following Cyberpunk 2077 since it's release you are probably aware that it's quite the ambitiously large game.

It has had a rather tumultuous start, with it being unplayable on Playstation 4 and Xbox One consoles at launch. CD Projekt perhaps should have put more time into optimizing the game, rather than adding fun easter eggs...

You may have already spotted the GlaDOS Easter Egg in Cyberpunk 2077. If you haven't however you should definitely check out this fun homage to Valve's Portal series.

Here we have compiled a list of references and easter eggs for you to find in Cyberpunk 2077.

It's safe to say there are a lot of subtle references to other works and media in Cyberpunk 2077. There might be others waiting to be discovered too.

One of the most overt and obvious references can be found in the prologue to the Corpo lifepath.

The player can see a magazine entitled "Retro Gaming" which has a front-page showing reference to CD Projekt's most notable game, The Witcher 3.

In the image, The Witcher 3 is described as "game of the month", which speaks to its success as one of the most popular and well-received role-playing games.

Seems oddly ironic given the fact that Cyberpunk 2077's Dev's are already apologizing for last-gen issues and offering refunds.

There is also an arcade machine in the game which features a horse called 'Roach'. This is another subtle reference to The Witcher 3, as this is the name of the Witcher's horse.

It might also be worth mentioning that you can pick up a few Witcher 3 themed items in-game. If you don't know how to get the Witcher's black unicorn sword in Cyberpunk 2077, we recommend picking that up too.

At one location, the player comes across two bodies and a motorcycle just outside of a train tunnel.

Upon closer inspection, the player can see that bodies have the names "JC" and "Little Smoke".

This is a clear and direct reference to GTA San Andreas's 'CJ' and 'Big Smoke'. An iconic pair in the series, and a play on their original names.

There is also a conversation the player can see that makes reference to their failed attempt at "following the damn train". Another classic mission in GTA San Andreas.

There are more Cyberpunk 2077 easter eggs that make reference to other popular game series.

Valve's Half-Life 3 has been a running joke on the internet for a long time. The much-anticipated game has been the subject of countless discussions and memes.

This seems somewhat ironic considering Cyberpunk 2077 has some very big issues. The game has been regarded as a bit of a letdown by fans after such a long-awaited release.

Players in Cyberpunk 2077 can find an easter egg that references Half-Life 3. CD Projekt teasingly calls "No Life 3", this might pressure Valve into releasing the game sooner than 2077...

A more obvious easter egg and one that sci-fi fans are likely to pick up on is a Matrix reference.

This is quite fitting considering that Keanu Reeves, who voices and plays Johnny Silverhand in Cyberpunk 2077, also happens to be the star of the sci-fi classic.

During one scene, the player must make a choice offered by a stranger. The player can choose either the "left" or the "right" pill. A clear reference to the red or blue pill scene in The Matrix film.

You'd be hard-pressed not to notice Cyberpunk 2077's easter egg which references Batman.

At one location in the game, the player can actually drive the famous caped crusader's "bat-mobile". There is also a reference to the dark detective and his tragic and well-known backstory in a text.

"'don't be afraid, there's nothing there.' - That's what they always told me the night my parents were murdered". This is a clear reference to Batman's tragic and well-known origin story.

What kind of sci-fi themed game would be complete without an Easter egg which pays homage to Bladerunner.

Any science fiction fan will realize the importance that Bladerunner holds in the sci-fi genre.

During the mission, "I Walk The Line" Roy Batty, the replicant and main antagonist in Bladerunner, can be found sat high atop the buildings.

If you're a Bladerunner fan then you'll easily be able to spot this reference to the popular sci fi classic.

At one point during the main story, the player must infiltrate a grand hotel and steal an important object to progress the story.

However, one easter egg you might have easily missed if you weren't paying attention is the Japanese visionary game designer Hideo Kojima, enjoying a drink in the hotel bar.

Hideo Kojima is regarded as one of the leading designers in the video games industry. The creator of Death Stranding and the Metal Gear Solid series can be located in the corner of the room talking with other NPC's, talk about aging well!

Another perhaps less obvious reference to Hideo Kojima and his work can be found in Cyberpunk 2077.

At one point in the game, the player can come across a "BB", a reference to Kojima's Death Stranding game. You might want to keep a lookout for any babies encased in familiar orange liquids on your adventures in Night City.

Fans of Death Stranding will be able to recognise this easter egg anywhere. But if you arent too familiar with the game, you might just find this a little bit creepy...

Despite its rough beginning, CD Projekt has vowed to fix their game and make it a much better experience.

A recent conference call has shed some light on Cyberpunk 2077's launch issues.

Cyberpunk 2077 players are unimpressed. As the days go by, players are finding more and more to be unhappy about, and rightly so!

The game is still very buggy, and optimization seems to be a key issue affecting all platforms.

Although CD Projekt has offered an apology and a statement on Twitter, there need to be some major improvements.

The game can't be considered a proper open-world RPG experience until these issues have been resolved effectively.

In the meantime that doesn't mean that players can't make the most of a bad situation. Perhaps you might be able to find some easter eggs we've missed in Cyberpunk 2077.

Cyberpunk 2077: Everything You Need To Know About Progression
3

Cyberpunk 2077: Which Life Path Is Best For Your Character?
4

Cyberpunk 2077: What Time Will I Be Able To Preload The Game?…

Cyberpunk 2077: Everything You Need To Know About Progression…

Cyberpunk 2077: Which Life Path Is Best For Your Character?…
Most Read Now