Yes, you can catch a shiny version of Larvitar in Pokemon GO, but this is a very rare occurrence.

Any Larvitar encounter in Pokemon GO could be with a shiny version, whether it is a wild Pokemon spawn, an encounter after a Raid, or as a research reward.

Check out our Pokemon GO shiny odds guide to find out the exact chances of encountering a shiny Larvitar!

Also, if you’re after a shiny Larvitar, there is no better time to catch one than the upcoming Larvitar Community Day Classic!

What Color Is Shiny Larvitar?

Shiny Larvitar has much brighter colors than the standard version of the Pokemon.

It is a very bright shade of green and has a vibrant purple stomach. This makes it look very different to the standard version of Larvitar which is light green with a reddish brown stomach.

Although, you’ll probably want to evolve it into a shiny version of Pupitar and then Tyranitar.

Here are the fastest ways to earn Candy in Pokemon GO so you can speed up this process and get a shiny Tyranitar as soon as possible!

How to Get Shiny Pupitar and Tyranitar in Pokemon GO?

Tyranitar is one of the best Dark-type Pokemon as well as one of the strongest Rock-type Pokemon in Pokemon GO. Not only will evolving a shiny Larvitar give you a rare shiny, but an extremely powerful one too!

While Tyranitar is a very rare shiny Pokemon, there is one rare shiny that even the most dedicated Pokemon GO players struggle to find. Here’s how to catch shiny Ditto in Pokemon GO! 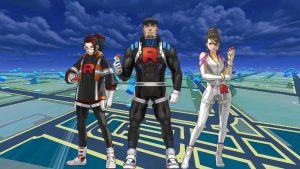 How to Complete Shadowy Skirmishes Research in Pokemon GO & All Rewards

Can You Catch Shiny Blitzle in Pokemon GO?