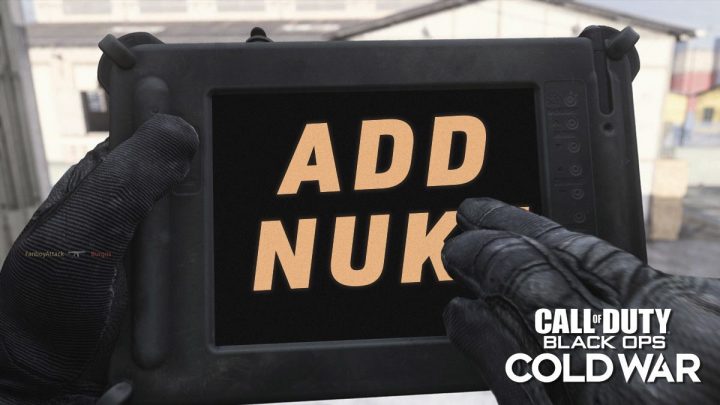 Call of Duty: Black Ops Cold War players want a nuke killstreak to return to the game when it launches.

The latest installment in the Black Ops franchise is yet to launch and already Call of Duty fans are calling for change. In a recent poll, players voted to see whether or not a nuke killstreak should be added to multiplayer matchmaking.

The poll not only touched on whether players would like a nuke present in the game, but also whether said nuke should immediately cause the match to end. With over 2,144 people voting, the answer is clear.

Nearly 85% of users want to see the devastating nuke return to Black Ops Cold War. What’s more, over half want the game to end upon its detonation.

Only 15% of poll participants don’t want the nuke to be present in Black Ops Cold War. Of course, this sample of users on Reddit isn’t necessarily reflective of the game’s overall fan base.

The Call of Duty Nuke Killstreak

This feature was first introduced in Call of Duty: Modern Warfare 2. Back then, players had to get 25 kills without dying to earn the match-winning bomb.

Even when making use of the Hardline perk, that was still 24 kills needed to trigger the Tactical Nuke.

The nuke also appeared in China’s free-to-play Call of Duty Online, and later in Call of Duty: Mobile. In all instances, the nuke wipes out all enemy players, and immediately ends the game.

Most recently, the Tactical Nuke appeared in Call of Duty: Modern Warfare. The killstreak is a secret appearance, and it can only be garnered with 30 kills without dying.

What’s more, these kills can only be with weapons, no killstreaks allowed. A second nuke, labelled a DEFCON Nuke, can also be found.

This second bomb is dropped when one team holds all objectives in a game of Ground War for 45 seconds.

Notably, the nuke has never actually appeared in a Black Ops game. However, we know that the Cold War itself revolved around the threat of nuclear weaponry.

It’s worth mentioning that Call of Duty: Black Ops Cold War doesn’t actually have Killstreaks as returning players might remember them. Instead, the game’s is the latest title to continue with the Scorestreak system.

With Scorestreaks, players get points towards rewards from playing the objective, as well as earning kills. Unfortunately, Black Ops Cold War players are complaining about the Scorestreak system too, as there have been some controversial changes made that have fans feeling unhappy.

We recently learned from Warzone’s “New Threats” intel mission, that there’s a nuclear warhead under the game’s battle royale map. With that in mind, perhaps it’s more likely that you’d think that the Tactical Nuke could return.

The nuke probably won’t rear its head in the upcoming Black Ops Cold War Early Access Beta, but we’re not ruling it out just yet. The game still has a while before it launches, and Treyarch has proven that they’re taking fan feedback into consideration.

How To Unlock The CARV.2 in Black Ops Cold War & Warzone
More Call of Duty