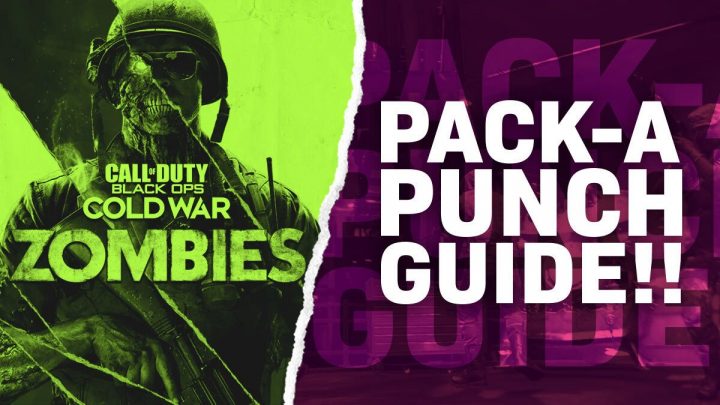 Those Black Ops Cold War fans with taste have already dived into the game’s Zombies mode. And if you’ve not already done it for yourself, here’s how to Pack-a-Punch in Die Maschine.

The Black Ops Cold War Zombies mode has players returning, at least initially, to classic map Nacht der Untoten. With a whole new Zombies story to explore, long-term fans will be happy to know that the Pack-a-Punch is still in the game.

The mechanic has appeared in almost every Call of Duty: Zombies map to-date, and it allows players to upgrade their weaponry. Typically, this includes a name-change, as well as additional attachments, damage output, and magazine capacity.

But to get your hands on some sweet upgraded weapons, you’ll first have to make it to the Pack-a-Punch machine.

How to Find the Pack-a-Punch in Die Maschine

Turning on the Power

From the opening area of Black Ops Cold War’s Die Maschine, you’ll want to head into the Nacht der Untoten bunker for 500 points. From here, you’ll also need to clear the way up the stairs, something that costs 750 points.

Follow a series of Dark Aether arrows, and you’ll come to a further wall which must also be opened. For 1000 points, you can set an explosive on the structure to head back outside.

In front of you, as you head out, you’ll encounter a Juggernog machine. Pass that by, and not long afterward, you’ll come to another rubble barrier. For 1200 points, you can remove this obstacle and continue on.

Inside the dark area, a bunker door takes a few seconds to open up fully. Once open, heading inside and down the stairs will allow you to encounter a door on the right-hand side.

This one costs 1500 points, and you’ll need a further 1500 for the collapsed doorway at the end of the room. The Particle Accelerator room is a big one, but take a look upwards, and you’ll see another Dark Aether arrow lighting your way.

This arrow points towards the final door, which costs 1750 points. And it’s in here that you can turn on the power.

At either side of the Particle Accelerator room you were just in, you’ll see two terminals that need activating. Now, a Dark Aether portal, known as an Anomaly on your screen, will activate.

Enter the Dark Aether portal to be transported to an alternative, darker version of the Black Ops Cold War Zombies map. Now, heading to the room you found the power switch in will allow you to head up the stairs and back to the map’s spawn.

Follow the Dark Aether arrows back through the map, using the same route as before. Eventually, you’ll see an Aether Tunnel ahead of you, which can be used for 500 points.

The Aether Tunnel transports you to the Medical Bay, where a Pack-a-Punch machine part lies in wait. But there’s still more preparation to do.

Head back to the Particle Accelerator room, using the Dark Aether arrows if you get lost. Where the Dark Aether portal once stood, now lies an area where you can reforge the Pack-a-Punch machine.

Accomplishing all this will send you back to the regular version of the game’s map, now with a Pack-a-Punch active and ready for use.

It’s a long route, and you’ll need a whopping 8700 points to get this far. However, it’s all worth it in the end, as the Pack-a-Punch will allow you to upgrade your weapons to your heart’s desire.

How to Use Black Ops Cold War’s Pack-a-Punch

Unlike previous installments of Call of Duty: Zombies, players might notice that the Pack-a-Punch is now anything but random. In fact, players can choose between 3 upgrade levels for their weaponry.

Upgrading a weapon once costs 5000 Points, but players can also choose their own Ammo Mods for a smaller fee. Adding elemental damage to your weapons will cost 2000 Points a-piece.

Players can choose between Napalm Burst, Dead Wire, Cryofreeze, and Brain Rot, each with distinct advantages. We’d recommend trying a few of these out before settling on your favorite.

It was a substantial task getting to the Pack-a-Punch, but it’s all worth it in the end. If you’re looking for further guides for the newly-released game, here’s how to ensure that you’re running Black Ops Cold War on the best settings.

Although this is traditionally more of a Call of Duty Multiplayer issue, players may benefit from a fix to Black Ops Cold War lag when playing Zombies with friends. When you are ready to head into some multiplayer action, be sure to check out the best weapon loadouts in Black Ops Cold War.

How To Unlock The CARV.2 in Black Ops Cold War & Warzone
More Call of Duty