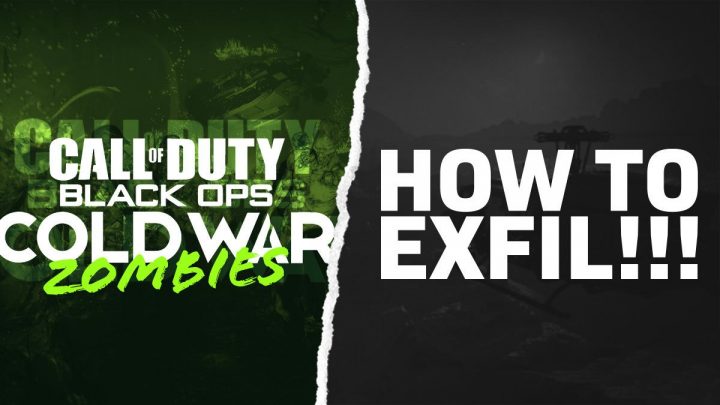 There’s a new mechanic in the latest undead horde mode that allows players to escape from Die Maschine altogether. Here’s how to Exfil in Black Ops Cold War Zombies.

For the first time, players can escape the Black Ops Zombie hordes through a new Exfil mechanic. The mechanic allows players to call in a chopper to extract from their Zombies match, finally surviving the encounter.

Doing so will allow players a chance at some bonus XP and Raw Aetherium Crystals. However, getting to the chopper in one piece is going to be a challenge in itself.

If you think that making it any further into the game is an impossible task, it’s time to attempt an Exfil. As Treyarch states:

“Why die if you don’t have to? With the new option to Exfil from the map when your squad can’t last much longer, you can roll the dice and try to survive long enough to escape with some extra rewards… but it won’t be easy.”

To make your escape via Exfil in Black Ops Cold War Zombies, you’ll have to make it significantly far in the game. That means surviving against the incoming zombie hordes for at least 10 rounds.

We’d also recommend opening up a few pathways for yourself, as you’re going to need them upon extracting. When the Exfil is initiated, zombies will be coming thick and fast, so it’s best to be prepared.

At Round 10, and every 5 rounds after that, the opportunity to Exfil will arise. Activating the radio that can be found in the initial outside spawn area in Die Maschine will call in your exit plan.

It’s worth pointing out that if you’re playing as part of a team, the radio needs a majority vote for the Exfil to take place.

Once active, a helicopter begins to arrive, and you need to head to the indicated area on your map. The helicopter is flying low at the Pond, but it won’t touch down until you clear away the zombie hordes.

You don’t have long to get rid of the undead, so be sure to work fast. Use explosives and powerful weapons to overcome the odds.

Then simply board the chopper, and enjoy your bonus rewards.

How to Unlock Operator Park

There’s actually a reward for extracting successfully that goes beyond XP and raw Aetherium Crystals. Managing to Exfil 3 times successfully in Black Ops Cold War Zombies will net you an extra unlock.

Operator Park will be a reward for players able to pull off this difficult task. The new Operator can be taken into any multiplayer game mode, including Warzone.

Anyone looking to unlock all Black Ops Cold War Operators should check out our guide on the subject. And it’s worth noting that you’re not going to easily make it to Exfil without the Black Ops Cold War Pack-a-Punch mechanic either.

If you’re looking to rank up fast in Black Ops Cold War, getting that extra Exfil XP is crucial. You’ll also want to ensure that you’re playing on the best possible Cold War settings.