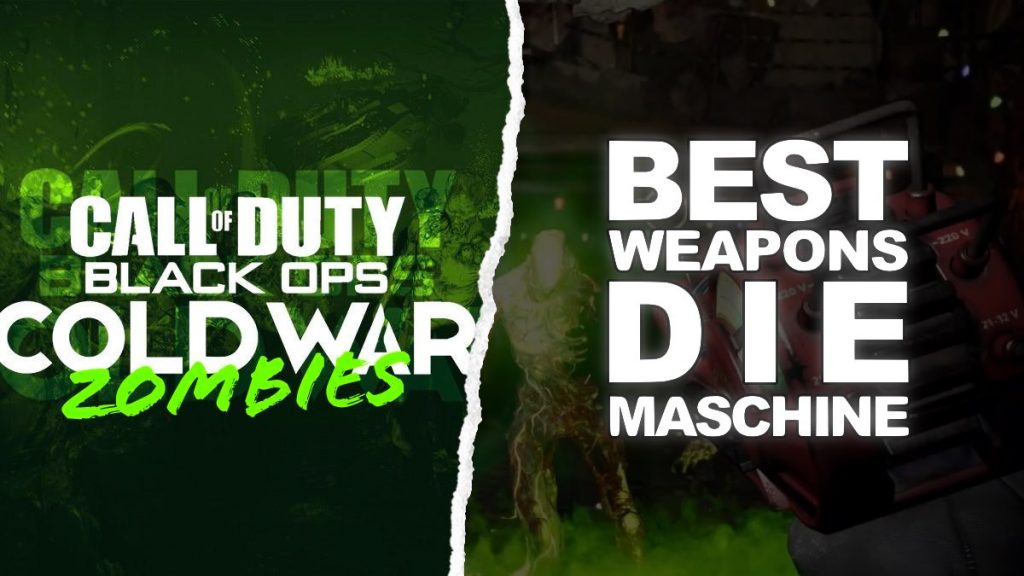 Weapons are an integral part of the core gameplay of Call of Duty Zombies, and it is important to know which weapons are a must-have to slay hordes of the undead.

With the all-new weapon rarity system, players can make any weapon in the game a powerful asset to use. However, just like every Zombies experience, there are a few weapons that stand out from the rest. This is my Top 5 Best Weapons to use in Die Maschine for Black Ops Cold War Zombies list.

For starters, I recommended players to use the standard common/loadout knife.

The knife can instantly kill zombies until around fourteen, where it starts to become a two-hit kill. Firstly, you can upgrade the knife at the arsenal and also pack-a-punch the knife for the first time in a zombies experience.

So not only can the knife be beneficial in the early game, but you can do substantial damage as the rounds get higher and higher.

The Stoner 63 is a heavy-hitting LMG with a high rate of fire.

Similar to the Knife, the Stoner 63 at the common/loadout variant is an efficient tool to use when climbing in the rounds.

When pack-a-punched and upgraded through the arsenal, the Stoner 63 eviscerates hordes of zombies easily, as well as taking down the Megaton fairly quickly. The best part about the Stoner is its ammo supply.

120 in the magazine with 360 in the reserves. With this weapon's damage efficiency, the amount of ammo is more than enough to kill enemies.

The 3rd best Die Maschine Zombies weapon in the list is the M16.

The M16 is a tactical rifle in the game that you can earn fairly early on. Surprisingly, this weapon does a ton of damage when you pack a punch and upgrade it at the arsenal.

The M16, just like the other weapons on this list, can eliminate the Megaton with ease. On top of that, for those of you who have preordered Black Ops Cold War, you will immediately have the "Western Front" blueprint of the M16.

I highly recommend this variant because of the various combination of attachments the weapon comes with.

Plus, when pack-a-punched, you have 130 bullets in the magazine. That is more than enough for a tactical rifle, and you'll be able to kill zombies without using too many bullets.

Moving on, the second best weapon I recommend is the Gallo SA12.

You have probably seen numerous streamers using this shotgun and for good reason. The Gallo SA12 is very efficient at not only taking down hordes of Zombies but also eliminating the Megaton.

Plus, you can buy the Gallo SA12 off of the wall, increasing the value of this weapon.

The ammo capacity might be lower than other weapons in the game, however, the ammo crates scattered across the map will make sure you can have full ammo at all times, assuming you have the points for it.

Treyarch is continuing what seems to be a tradition for the past few iterations of zombies, having that one heavy-hitting boomstick of a shotgun that does a ton of damage.

The Ray Gun is a staple in the zombies universe that has been cast aside for the past few years do it's mediocrity as well as being out shined by other game mechanics from previous games.

However, in Black Ops Cold War Zombies, the Ray Gun returns to its former glory. On launch day, the Ray Gun was a one-hit kill forever.

This is not an over-exaggeration either. Treyarch then had to patch the Ray Gun so that it does 1/3 of its original damage, so it stops becoming a one-hit kill much earlier.

Even after this patch, the Ray Gun can take out a full horde of zombies in 2-3 shots in higher rounds such as round 40 or 50.

A lot of zombies players have even opted out of using the D.I.E. Shockwave and its upgrade variants for the Ray Gun instead, it's that good.

You can acquire the upgraded variants of the D.I.E. by checking out our guide on how to get & upgrade the D.I.E. Shockwave.

Each of the weapons listed above will get the job done efficiently.

These weapons are only a few that stand out to me as being some of the go-to weapons for Die Maschine. As always, in order to use each of these weapons as efficiently as possible, you're going to have to pack a punch and upgrade them at the arsenal.

Check out our guide on how to pack-a-punch on Die Maschine.

What do you think of my list of the Top 5 Best Weapons in Die Maschine for Black Ops Cold War Zombies?