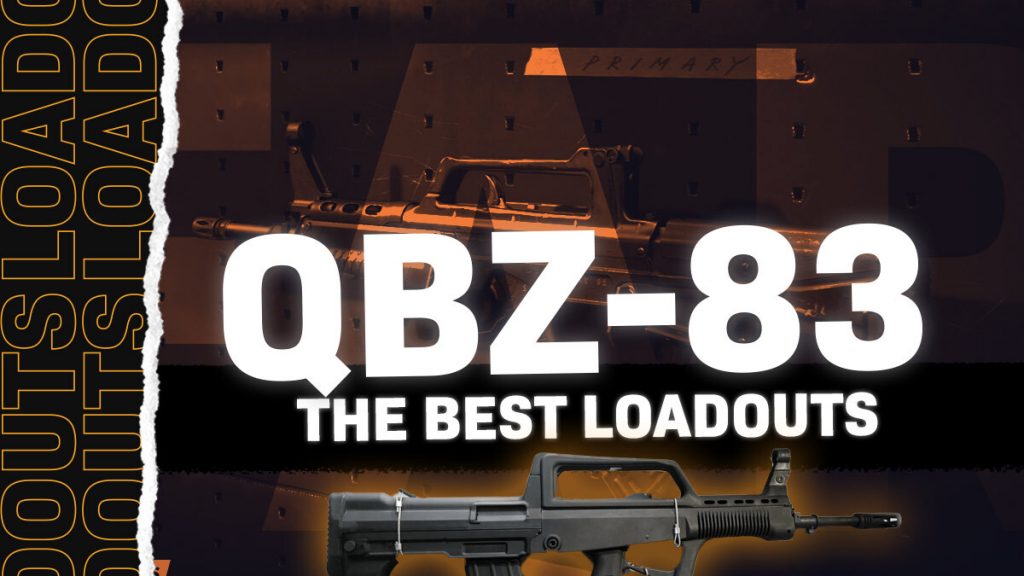 The QBZ-83 is what we consider a hybrid rifle, much like the FFAR 1 that we have covered in the previous post.

Meanwhile, the FFAR 1 has a submachine gun like fire rate and a very short range to go with it.

The QBZ-83 boasts a faster aim down sight time, sprint out speed, and overall movement speed. This gun has aggressive gameplay written all over it.

The QBZ-83 also offers the most straight forward recoil.

That being vertical recoil. The QBZ-83 has little to no side to side bounce.

The best five attachments to use for the QBZ-83 in Black Ops Cold War.

This set up is meant to give you better handling than most submachine guns, mixed with assault rifles like stopping power and range.

With this "low drag" set up, we are going to be doing just that, avoiding any drag.

All the while streamlining the QBZ-83 to make the fastest handling assault rifles in the game.

Starting off with the 13.7" Ultralight Barrel giving us a modest 5% boost to our strafing speed. This coupled with the fact that the QBZ-83 has best in class movement speed and strafing speed.

However, we are not going to stop there. We are going to be light on our feet with the SAS Combat Stock offering yet another 5% boost to our shooting move speed.

The SAS Combat Stock is also going offer a 40% increase to our aim walking movement speed.

This combination of strafing and shooting movement speed will make us elusive in gunfights.

Going with our speed or nothing approach, we are going to be adding Infiltrator Grip to this already speedy setup. Thus, boosting our movement speed yet again.

The Infiltrator Grip offers all pros across the board, including in the shooting move speed department and the aim walking move speed.

The Serpent Grip offers a handsome aim down sight boost at 25%.

This will take the QBZ-83 that already has the best aim down sight time in the entire assault rifle category and make it even snappier.

We will be finishing this class set up with the Infantry compensator, offering some much needed crunch to this weapon's vertical recoil.

As we stated before, the QBZ-83 recoil pattern is extremely easy to control as it's mostly vertical.

A quick pull on the right thumbstick or a slight drag of the mouse will help you stay on target.

The Infantry Compensator will make the recoil on this weapon coast on cruise control. Meanwhile, you can worry about outperforming the enemy with speed from this breakneck loadout.

The following 5 attachments will give you the best QBZ-83 class in Warzone.

The 15.5" Reinforced Heavy barrel (or the equivalent) is easily one of the best attachments to add any assault rifles.

It offers both a boost to damage range and bullet velocity, making it perfect for the two massive maps available in Warzone.

However, these amazing attributes come at the cost of a minor hit to the sprinting move speed and a 20% hit to our aim walking movement speed.

Next on the list is the Agency Suppressor concealing our position with 100% muzzle flash concealment and extending our range.

The Agency Suppressor does come at the cost of a minor hit to our aim down sight speed and our aim walking steadiness.

We will be using an optic for our next attachment as the QBZ-83 tends to have obstructive iron sights. At long-range, they can make target acquisition more difficult.

To remedy that we will be adding the Millstop Reflex for a "low zoom" clean sight picture.

The QBZ-83 has the best handling stats out of the entire assault rifle category, and we are going to keep it that way with the SFOD Speedgrip.

Adding 15% horizontal recoil control and a massive boost to our sprinting move speed by 10%.

The SFOD Speedgrip does come with some heavy hits to our handling stat, but not if we have anything to say about it.

In turn, the SAS Combat Stock will hurt our hip-fire accuracy by 15%.

This hyper-aggressive assault rifle is off to the race. With this setup you can challenge enemies out to a considerable distance, without losing out on any of that handling goodness that's hardcoded into the QBZ-83's DNA.

There you have it; two of the best classes for the QBZ-83 in both Cold War and Warzone.

This assault rifle gives the submachine gun a run for their money with its amazing handling stats. While still holding a superior assault rifle range.

When it comes to either of these classes, you can't go wrong.

Try them out, dominate, and come back for more expertly crafted class setups!