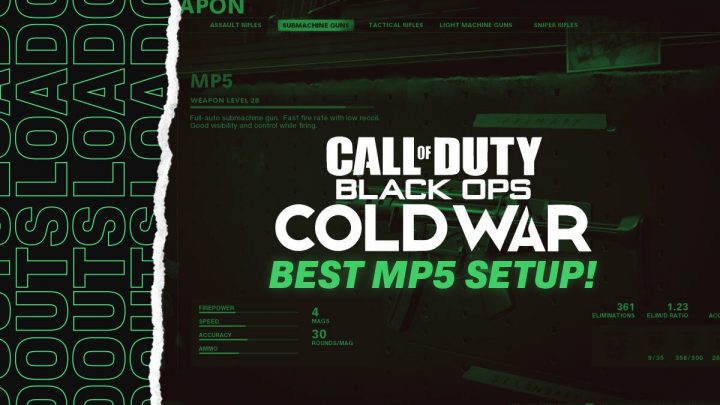 One of the best guns in Black Ops Cold War Beta, the MP5 remains very strong in the full release. Here are the best loadouts for the popular weapon.

If you’ve been killed by the MP5 in Black Ops Cold War, you already know how dominant the gun can be. In the right loadout, the MP5 is an unstoppable force, especially on smaller maps.

It’s frustrating to have so many players running the top-tier weaponry in almost every game. However, as the age-old saying goes: if you can’t beat ’em, join ’em.

If you’re looking to pick up the MP5 for yourself, here are some of the best MP5 loadouts in Black Ops Cold War:

If you’re running the Gunfighter wildcard in Black Ops Cold War, you’ll be able to upgrade your MP5 fully. Adding extra attachments to your weapon is a sure-fire way to ensure that your gun is better than any other MP5 on the battlefield.

The Sound Suppressor comes in handy, allowing players to remain incognito on the game’s map. Meanwhile, the 40 RND Drum means that you’ll never be caught out without bullets to spare.

The Foregrip leads to less vertical recoil and the Collapsed Stock with Speed Tape are all about making the speedy weapon as fast as possible.

All-in-all, this is one of the best MP5 loadouts possible in Black Ops Cold War so far. But it does mean that you have to choose a Wildcard that allows for additional attachments.

The Best MP5 Loadout (No Gunfighter)

If you’re reserving your Wildcard for something else, consider running the following attachments on your MP5. This way, you can upgrade the MP5 differently to compensate for the lack of slots.

With the 9.5″ barrel, you’re getting a real bump to bullet velocity, and the MP5 is now capable of putting enemies down at significantly better range. We’ve also swapped out the magazine boost for optics, but this is completely optional.

Having a bigger magazine is nice, but it means you’ll be reloading slower as a result. Here, the Sillix Holoscout will help you hit the headshots, and it reduces sway as an added benefit.

This Cold War MP5 build is designed to help you shoot faster from sprinting, ADS quicker, and do better damage at range. And the only tradeoffs made are in your movement speed.

We’ve got the info you need if you want to check out some of Black Ops Cold War’s best weapon loadouts. And for those moving into Cold War Zombies, here are the best weapons to use in Die Maschine.

At the end of the day, there are sure to be many changes to the weapon roster as we head into Black Ops Cold War Season 1. Be sure to check back for all the latest updates on the weapon adjustments as they come.

And if you’re still working your way through the levels, here’s how to rank up fast in Black Ops Cold War.