The H4 Blixen is one of the most powerful SMGs in Warzone after the Season 4 update. Here you will find the best H4 Blixen loadout with insane TTK.

To get a win in Warzone you need to equip the best weapons in the game. However, it is not easy to keep up with the meta, especially after a big update.

Warzone Season 4 brings a ton of weapon buffs and nerfs, making the meta completely change. Although the H4 Blixen suffered some nerfs, it remains one of the most powerful SMGs in Warzone.

The H4 Blixen even made it into the best meta SMGs after Season 4!

Most players are focused on the new overpowered Marco 5 loadout, however, the H4 Blixen is a great option to get those close-range kills in Warzone.

The H4 Blixen is a very fast SMG with insane TTK, and also very low recoil when using the correct attachments.

Here are the best attachments for the H4 Blixen:

Make sure you are running it alongside the insanely buffed NZ-41 Assault Rifle loadout, which is taking over Warzone in Season 4.

Read More: How to Complete Every Easter Egg in The New Fortune’s Keep Map.

The new low recoil UGM-8 loadout would also be a good option to equip in your H4 Blixen loadout.

Warzone fans are upset that Vanguard weapons are so overpowered, and players want a new only Modern Warfare weapons playlist to avoid Vanguard guns.

Finally, Warzone fans are upset over campers in the new Fortune’s Keep map and want Rebirth Island back! 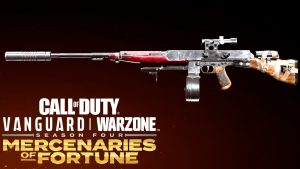