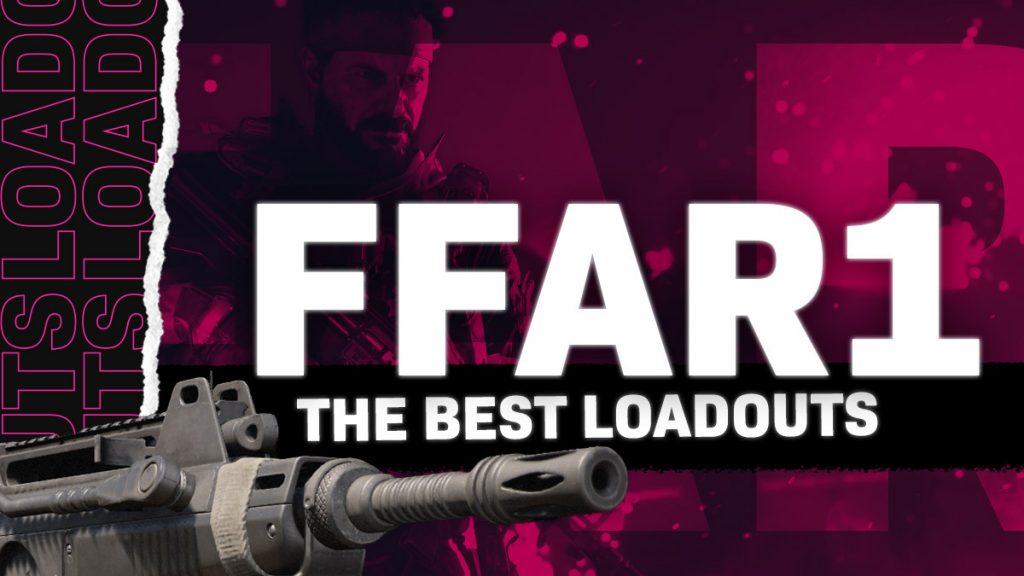 Creating the best FFAR 1 loadout means choosing the right attachments and building a devastating class for short and mid-range.

The FFAR 1 or the FAMAS, has seen many irritations throughout the years, with the most memorable being its three-round burst version. However, the Black Ops Cold War take on this French weapon is nothing to sleep on...

Just like the AK-74u, shares a hybrid DNA, in the form that even though it is an assault rifle, it handles more like a submachine gun.

Due to the fact that it has the fastest fire rate in its class at the cost of the worst effective damage range, but that's not all the FFAR 1 will cost you!

It has an impressive fire rate coming in at an astonishing 909 rounds per minute.

When compared to the other assault rifle that hovers anywhere between the 650 to the 750 round per minute rang, the FFAR 1 is in a league of its own.

However, choosing the FFAR 1 as your weapon of choice means you will have less damage output out of the entire assault rifle class. In Lehman terms, the FFAR 1 takes a whopping 7 shots to kill.

When you couple this with the fact that the FFAR 1 only has 25 rounds in the mag, it doesn't seem competitive enough to earn its own stirpes.

Nonetheless, it all boils down to play style.

Don't let it fool you. This combination of high fire rate with low damage means that this submachine gun like assault rifle has one of the fastest time to kill in the entire assault rifle category.

Putting enemies down fast is what the FFAR 1 does best.

Today we have two classes set up for you. One that will play to the FFAR 1 strengths, and another that makes it be more in line with its full-auto assault rifle dream.

These are the best five attachments to use for the FFAR 1 in Black Ops Cold War.

This set up is all about the flanks and getting behind enemies lines for submachineguns-esque gameplay.

The FFAR 1 with a break-neck speed fire rate come with some substantial recoil.

When you couple this with the 7 shot it takes to kill, and the 25 round mag means that every bullet is precious.

The two problems of low ammo count and heavy recoil plaguing the FFAR 1 and holding it back from reaching the top of the assault rifle food chain.

We are going to be starting with the SOCOM Eliminator, offering the best in clast vertical recoil performance by boosting our vertical recoil control by 17% and giving us an 85% percent boost to our muzzle flash concealment.

What this means in real-time is that our radar signature will still pop up on the mini-map but will fade considerably faster.

We can still use this to our advantage by luring the enemy to our previous location as Cold War public matches are mostly a red dot chasing fest right now, with the suppressor meta being dominant in all game modes.

The SOCOM Eliminator does have some downsides, a minor decrease to our shooting speed, meaning we won't be able to strafe as fast during gunfights, and a minor hit to our horizontal recoil control by 10%.

For our next attachments, we will be fixing that horizontal recoil control lost from the SOCOM Elimanotor with the Field Agent Grip.

The Field Agent Grip will give us a minor boost to our vertical recoil.

Still, the real reason for the field agent grip taking one attachment slot is due to its impressive management of horizontal recoil. With a whopping 20 percent boost. Keeping us on target and accurate.

This does come with a massive hit to our strafing speed/shooting movement speed, but we will come back to that later...

Now that we have fixed the FFAR 1 high recoil problem, next is the magazine's low ammo count.

We are going to be using the 34 RND speed mag, offering a larger ammo pool within the mag and a 25% boost to our reload speed. Ensuring that we always have enough lead in the magazine for every enemy on the other side of the bridge in crossroad strike.

The 34 RND speed mag is gonna slow down our aim down sight time by a massive 20%.

Fixing the recoil and the ammo pool on the FFAR 1 has cost us massive hits to both our shooting move speed and our aim down sight speed, slowing our movement down to a screeching halt.

For our next two attachments, we will be fixing just that.

Starting with the Airborne Elastic Wrap speeding our aim down sight time by 30% and reducing the flinch by 90%.

For those of you who don't know, Black Ops Cold War has a totally different flinch mechanic than we have seen in other Call of Duty's.

In the past, whenever the player would get shot, it will result in the point of aim going up, causing the person to be less accurate due to being thrown off target.

In early entries, how hard the enemies would hit you would determine how much flinch would be perceived.

However, in Black Ops Cold War, flinch has been reduced to camera shake and some screen effects; nonetheless, no matter how insignificant it is, less of something bad is still a win in our book.

For our last attachment, we will be using the raider stock with a massive sprint to fire speed boost, helping us a come out sprint and bring our gun up faster.

The Raider Stock comes with a massive 40% boost in our aim walking speed, meaning that as long as we are not shooting, we have the best in class strafing speed to dodge incoming enemy fire.

This loadout is a setup for success at close range, but if you want to keep your distance, look no further than our next class setup. The Best FFAR 1 Class Set up for long range.

Use the 5 attachments below to create the best FFAR 1 for Warzone and Rebirth Island.

With the FFAR 1's super-fast fire rate and damage output, you can seriously handle business at close to mid-range. This class loadout is made to fix the shortcomings of this already powerful assault rifle.

The FFAR 1 is not meant to be a long-range weapon, both its recoil and its low muzzle velocity will stop it from doing that. However, adding the correct barrel can add a plot twist to that story.

At the centre of this set up is the 19.5" Reinforced Heavy Barrel increasing our effective damage range by 100% from the base 25.5 meters all the way up 63.6 meters.

The 19.5" Reinforced Heavy Barrel will also give us a huge boost in muzzle velocity by 40%.

On the other hand, this barrel will decrease our spriting move speed by 4%, also adding this to our loadout will cost us a whopping 20% of our aim walking movement speed.

Now that we have the range, we are going to be using the SFOD Speedgrip for a 15% boost to our horizontal recoil control keeping us on target at close to mid-range.

The SFOD Speedgrip will also increase out sprinting speed allowing us to get out of the circle if we get caught by the gas or close the gap on an enemy's position in the blink of an eye.

This grip is unlocked last in the "under-barrel" category, but that is not the only downside.

It will also come with a 6% hit to our overall movement speed, shooting move speed and our aim walking movements speed.

Next for this Warzone loadout is the agency suppressor multitasking by keeping us off the radar and increasing our damage range by 7.5%.

The FFAR 1 has a ludicrous 909 round per minute fire rate. Therefore, we will need to reload fast and reload often.

For that reason, we are going to be using the Jungle Style Mag.

Allowing us to reload 20% faster.

For our last attachment, we will be using the Kobra Red Dot.

As the fire rate tend to bounce the iron back and forth, it can sometimes obstruct you the sight picture.

The Kobra Red Dot will give us a clear reticle with the option to change it if we may like.

This optic offers just the right amount zoom for a variety of engagement at different ranges.

This class set up is ready for action by playing the role of point in your team.

This class set up is for breaching and covering the terrain at multiple ranges depending on the objective.

If needed, it can close the gap on a downed enemy or provide aid to a teammate.

There you have it; both of these FFAR 1 loadout's are ready to wreak havoc on your enemies.

Whether that be in Black Ops Cold War's multiplayer or in Warzone.

This ultra-fast fire rate assault rifle is ready for any situation you might throw at it.

If you're still working your way through the levels, here's how to rank up fast in Black Ops Cold War.

If you're trying to build the best MP5 loadouts, check out these loadouts for the powerful SMG.