Although Pokemon Legends: Arceus doesn’t have much in terms of new Pokemon, it does have some pretty awesome Hisuian forms for some beloved Pokemon!

Pokemon is known for introducing regional forms in their newer games. In this instance, Hisui is actually an ancient version of the iconic Sinnoh version. So these Pokemon are past forms of some Pokemon in a sense.

If you’re looking to complete your Pokedex then you will need to have a strong understanding of all the Pokemon you will encounter.

Here’s a list of the Hisuian Pokemon that are introduced in the new Hisui region.

Hisuian Pokemon is the new regional form introduced in Pokemon Legends: Arceus. Here’s every Hisuian form that you can come across in your adventures!

Growlithe and Arcanine from the original 150 Pokemon in Generation I get a makeover in Pokemon Legends: Arceus. Their Hisuian forms also change their original Fire-Type into Fire-Rock Type which some players will find more helpful in battle. They also sport a new rock-like horn that they can use to attack enemies!

Its soft fur is useful for the colder climates of the Hisui Region as well. Living in the Hisui Region they’ve learned to live without people which makes it harder for them to build trust with their trainers.

Voltorb and Electrode are also two of the original 150 Pokemon that have new Hisuian forms. Their Hisuian forms also change their type to Electric/Grass Type and their look resembles the wood Poke Balls from the new region more closely. They even occasionally released seeds from the holes in its head.

Players looking to evolve Voltorb to Electrode will need to get their hands on a Grass Stone.

All three of the starters in Pokemon Legends: Arceus will feature a Hisuian Form as their final evolution.

Hisuian Typhlosion is a Fire/Ghost Type and sports a much more timid look compared to its original version.

Hisuian Samurott is a Water/Dark Type that is said to be cold and heartless. It will attack any enemies with cheap shots and surprise hits.

Hisuian Decidueye is a Grass/Fighting Type that is fierce and has adapted to the harsh climates of the Hisui region. It uses its legs to fight and it can even shatter boulders with a kick!

Overqwil isn’t easy to obtain either. Players looking to evolve their Qwilfish will need to use its Barb Barrage a total of 20 times in Strong Style to do so.

They are both Dark/Poison Type.

Probably one of the most important Hisuian Forms you will come across, Basculin evolves to Basculegion.

Basculegion also serves as a seamount for trainers through their adventures in the Hisui Region.

It’s said that evolution occurs because the dead souls of other Basculin that could not withstand the harsh journey possessed it. Empowering it with their souls.

Another new evolution being introduced in Pokemon Legends: Arceus is Sneasler, who evolves from Hisuian Sneasel. The original Sneasel also boasts a new color scheme that is similar to its new evolution Sneasler.

Read More: Pokemon Legends Arceus: How to Evolve Sneasel into Sneasler or Weavile

Braviary gets a new Hisuian Form that is larger than its original form. It’s also used as an air transport for players around the Hisui Region.

Braviary is a Psychic/Flying Type.

Sliggoo and Goodra get new Hisuian forms with all-new abilities. Even though they look similar to their original forms they boast new abilities.

They are both Steel/Dragon Types.

The Hisuian Form of Zorua actually has a pretty sad story to its origin. The original Zorua was driven from its home and because of this, it ended up arriving in the Hisui Region. Living conditions were too harsh so the Zorua perished and were reborn as Ghost versions of themselves which became the Hisuian Zorua.

Zorua and Zoroark are both Normal/Ghost Types.

Lilligant not only has a new Hisuian Form but it is also one of the first Noble Pokemon that players will encounter. Noble Pokemon are Pokemon Legends: Arceus version of boss battles in a sense.

Once encountered to actually have one on your team you will need to use a Sun Stone to evolve a Petilil.

Avalugg is another Pokemon that is a Noble Boss, but its Hisuian Form isn’t too different in looks aside from a slightly different color scheme.

It is a Rock/Ice Type.

Hisuian Forms may be the newcomers coming to Pokemon Legends: Arceus but there are plenty of familiar faces returning. Check out the complete list of Pokemon here!

For players looking to shiny hunt make sure to check out our guide on how to increase your shiny odds.

Finally, players can also trade for their favorite Pokemon so find out how here!

@Muhammad, agreed. This is a poor article. Can't even spell voltorb. 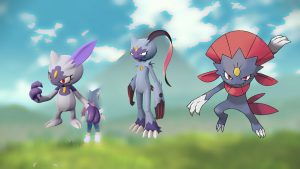 Pokemon Legends Arceus: How to Evolve Sneasel into Sneasler or Weavile
4

Pokemon Legends Arceus: How to Evolve Sneasel into Sneasler or We…
Recommended