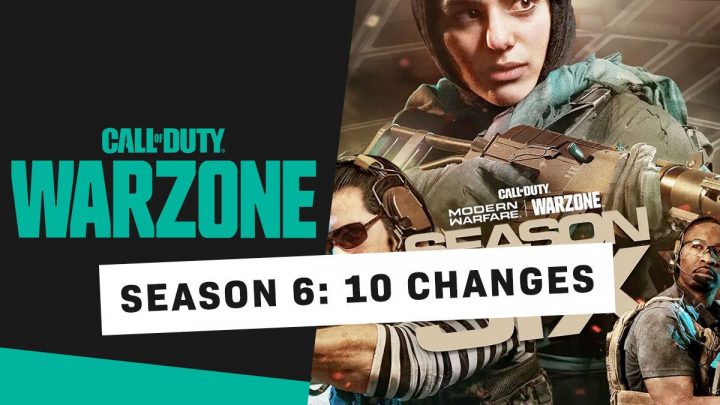 Call of Duty: Warzone Season 6 (update version 1.27) is finally here, and it brings some real changes to the game.

Once players have download the substantial update to the battle royale title, they’ll quickly release that some aspects of the game have changed. Some changes are more drastic than others, but most players will agree they’re for the best.

To ensure that the game always feels fresh and fair, developer Infinity Ward has done their best to fix bugs and tinker with weapon damage. They’ve also added a range of new content to the game with Season 6, which is sure to bring many players back to the title.

There’s still work to do, but the Modern Warfare and Warzone Season 6 patch notes are a good step in the right direction.

C4 has always been very strong in Call of Duty: Warzone. The equipment is incredibly popular, due to its ability to quickly detonate after throwing.

Players use the explosive to down enemies around corners or instantly kill a team in a car. There’s even a new trick with C4 that kills a full squad in a second.

Now though, C4 has received an initial throw velocity nerf of 30%, and the device will beep before detonating after a slight delay. These changes are sure to affect how the powerful tool is used in-game, but the damage of the equipment remains the same.

2 – Origin 12 Shotgun Has Received a Nerf

The Origin 12 was running rampant around Warzone in Season 5. Hopefully, this new nerf to the gun will ensure that people make it their go-to weapon just a little less.

After being shown off by YouTubers such as NICKMERCS, the Origin 12 was becoming a real issue. Now, Season 6 reduces the damage done by the gun at very close range.

Of course, that’s exactly where it performs best. Perhaps this is finally the end of the Origin 12’s reign of terror.

3 – Shotguns Have Been Buffed

It seems crazy to say it, given the previous point on this list, but yes, shotguns are stronger than ever. Perhaps in an effort to get other guns to contend with the Origin 12, shotguns slugs now do more damage.

We don’t actually have the figures to see exactly how much damage shotguns do now. In the end, we’ll have to feel it out by taking firing some shells in-game.

That’s right, Warzone Season 6 has a secret killstreak, not revealed in the game’s patch notes. This new reward can only be found in a specific area of the map but it’s guaranteed to help you beat the competition.

In fact, as more people begin to learn about the killstreak, it’s possible that the Warzone meta might start to revolve around getting hold of it first.

Hopefully, these changes mean that all the bugs that affect Heartbeat Sensors are gone at last. The Warzone Season 6 patch notes detail a couple of major changes to the popular equipment.

Firstly, those players who set their minimap to a stationary setting, rather than rotating with their view, can now use the device as intended. Previously, a bug was causing the Heartbeat Sensor to be inaccurate in this case.

The sensor is also now visible when using the Fin LMG’s Chainsaw attachment. Back in Season 5, it was not fully visible on the player’s screen.

It’s a new season and that means new faces are here to join the fight. Two new operators appeared in the Season 6 cinematic trailer and fans of Modern Warfare might recognize these iconic characters from the game’s story.

Those that want to get their hands on the Warzone Season 6 operators will have to purchase the game’s battle pass. To unlock both of them takes some serious playtime too, as the second operator waits behind the Tier 100 unlock.

Of course Warzone Season 6 is bringing with it some new weaponry. Those dropping into the fight can now find a couple of new rifles out on the battlefield.

The first is the SP-R 208 marksman rifle that YouTubers everywhere are eagerly rushing to test out. Expect reviews to be dropping everywhere in the next few days.

The second gun is the AS VAL rifle, long-renowned as being a powerful short-medium range weapon. It even packs a built-in suppressor, which is sure to help players out in the battle royale.

8 – NVIDIA Users Are in Luck

If your PC runs on NVIDIA hardware, you’re going to be happy with the Season 6 update. Call of Duty: Modern Warfare and Warzone players can now take advantage of the new NVIDIA Reflex support.

However, users should be aware that NVIDIA Reflex only works on GeForce GTX 900 and higher graphics cards.

9 – Subways Are Open for Business

Yes, the leaks were right and Warzone’s underground system is now fully operational. Players can jump aboard the train at the new Warzone subway stations in order to quickly travel around the map.

Thankfully, the train will never take players out of the circle, so there’s no risk of dying to the gas. The new subway will shorten the travel time in Warzone, which is sure to lead to faster, more satisfying gameplay.

Just be wary of running into enemies when heading into the dark underground of Verdansk. The subways are sure to be popular for the first few weeks of Season 6.

This update is paving the way for Call of Duty: Warzone’s Halloween update. In the game’s roadmap, it revealed that the Haunting of Verdansk mode is set to drop on October 20 and run through to November 3.

Bringing “new Limited Time Modes, rewards, and more”, this isn’t the event to miss. We also know that the game could be getting a Zombie Royale mode, which is likely dropping in this period.

With zombies in Warzone Season 6, this is set to be the most intense season yet. We’re excited to drop into the action and experience the fun for ourselves.